For the unaware, DIFFERENT LIGHT have been around since 1994. The combo went through various personnel changes to emerge the current line-up, embracing Trevor Tabone (keyboards / vocals), Petr Lux (guitars / backing vocals), Jirka Matousek (bass) and Petr Matousek (drums). Their newest CD ‘The Burden of Paradise’ takes the listener on melodic journey, blending a handful of styles. As far as I’m concerned, the subject matter balances between high standard neoprog and symphonic AOR, joined by glossy progressive metal and pop sensibility. These components result in great alliance. Particular album begins with a lengthy opus ‘In the Grand Scheme of Things’, where each segment is constructed to showcase the common route. The deep flowing keyboards and excellent guitar overlay scatter across 22 + minutes, bringing charm to thematic development of suite. The rhythm section is given ample space, animating the context within. Evocative vocals are turning around the instrumental prowess. The second track ‘Voice of Outside' keeps acoustic guitar, elegant piano and affective singing. Later on, some strings and percussion are appeared but the whole vibe remains light and airy. Graceful harmonies provide a supplementary depth. The follow-up, instrumental tune ‘A St. Martin’s Summer’ reflects a calm approach of Dream Theater as source for inspiration. Then we cross over into ‘Eternal Return’, featuring plenty of sequences. Like a homage to musical trademarks of Supertramp, this multi-part composition is replete with spectacular orchestrations underpinned by exciting choirs. There are noteworthy hooks, shifts in tempo and direction. The album continues by ‘Transient Dream’. Wriggling through changes, the song is full of colour and vibrant. What next? A kind of filmic interlude 'Mare Imbrium', whereat sound effects inject disturbing atmosphere. The penultimate chapter ‘In Love and War’ is divided on two respective halves, setting much more than a sum of diverse ingredients. The CD finishes off with balladry ‘All for You’. Translucent keyboards and evolving vocals lead the way. Cleverly crafted harmonies broaden the horizon. Occasionally, the acoustic guitar has an opportunity to shine. Switching bass and drums move along underneath a melody line. Au revoir! …
Overall, the listening experience is most pleasant. The enjoyment seems to increase with every spin as additional nuances are drawn out. Fans of softer, melodic progressive rock should definitely want to pick up a copy of 'The Burden of Paradise'. Visit the band’s website for more info, details and updates. 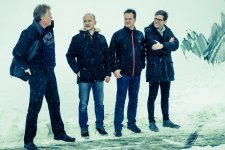 I'm sorry Prog Head, with some side-sympathy for the musicians in the band.
They don't know a different light. They're not from the Niagara Peninsula,
where the first commercial hydro generation in the world,
now only generates different lights.

That's a link to a photo album I just published, other different light fotos too.
However, no different lights were using musical instruments.
Sorry! That's not true, and I've got another foto.

You might think, not with rational thoughts, but being rotational,
especially if this band is getting heavy airplay,
what's this angel doing laying back and blowing some riffs, very jazzy?
Yeah, she was doing some Doo-Bop Miles with a little Niagara Falls roar.
The foto album shows the Sir Adam Beck station, with different lights.

Do you see those little golden notes floating around her trumpet?
I thought I could catch them like fireflies,
and take one home in an empty bottle tossed by Americans from their bus,
unable to take it over the border.
I was running around, hearing more notes, seeing more notes, feeling more notes,
but as I held one in my hand, and felt it sink into my skin, it turned golden.
Now, everything I put my hand on feels like Joshua's Trumpet,
and a song starts resonating, beautiful, beautiful, just beautiful.
You can imagine what my handlebars sounded like, all the way home.
Even if it got intense with accelerating harmonic notage,
it was the bearing in my one foot pedal. I should have recorded that.

The Niagara Peninsula was called "The Breadbasket of Canada", by natives.
Now it has the highest rate of cancer in Canada.
There were no diseases for humans until white men came.
Living in the Niagara Peninsula is living with the Burden of Paradise.
I should jam with these guys.
Last edited: 10 Apr 2016
P

John Watt said:
I'm sorry Prog Head, with some side-sympathy for the musicians in the band.
They don't know a different light...
Click to expand...

To each his own, John... I just do my best to describe particular band (album) the way I can.

no no no no Prog Head, you're right on.
I was just going on about the illuminated decorations around Niagara Falls.

The music lights up itself. I look to see who you are interested in.
P

The full album is available to listen to on Progstreaming site.

Different Light have began to create a successor for their CD 'The Burden of Paradise’. And the next album is tentatively scheduled to early 2018.
P

Prog Head said:
The full album is available to listen to on Progstreaming site.

For the time being, this page doesn't exist any more. But you may listen to entire album via YouTube chanel.

Prog Head said:
Different Light have began to create a successor for their CD 'The Burden of Paradise’.
Click to expand...

About one hour of material is written. Six new compositions (including three multi-layered tracks).
P

The album will feature: Amphibians (4 parts), Faith, Spectres and Permanent Apparitions (7 parts), Two Faces, The Answer, On The Borderline (6 parts). As I was lucky enough to hear some demoings, have to say that everything sounds great.
P

Different Light are getting close to some excellent news in the coming month.
P

Prog Head said:
Different Light are getting close to some excellent news in the coming month.
Click to expand...

The new album is on a verge of completion.

It should be available on May 31-st.
P

Prog Head said:
The new album is on a verge of completion.

It should be available on May 31-st.
Click to expand...

Because of signing by a record label, the new album can't be released until November.
P

After some delays, the brand new Different Light album can be obtained through Progressive Gears store.

Prog Head said:
After some delays, the brand new Different Light album can be obtained through Progressive Gears store.

After releasing the spectacular album ‘The Burden of Paradise’, DIFFERENT LIGHT took four years to complete their new item. So for now, we have CD ‘Binary Suns' (Part 1 - Operant Condition)’ which confirms the band's ability to provide remarkable and digestible progressive rock. Built around the talents of Trevor Tabone (lead singing & keyboard courtesy), Petr Lux (guitars & b/v), Jirka Matousek (bass) and David Filak (drums), the a close-knit group cooperate with Lucy Lux to bring an extra dimension in the beautiful sonic landscape. Their recent offering is a wonderful teamwork full of musical dexterity, quirky melodies, subtle dynamics, glued together by gentle harmonies and graceful playing. A crucial strategic move is the vocal delivery of Trevor Tabone whose voice soars, coming front and centre in the well-produced arrangement. Setting a variety of catchy atmospheres, the internal balance has been suitably accomplished. Even though I comment on this release, I don’t think that a track-by-track analysis would be of any benefit to the reader - because each listener should find his own meanings on the set which may be described as amazing blend with lots of transformative moments throughout. In terms of overall sound, the music comes into the universe where aesthetics and textures span from lofty Styx to occasional gesture of Yes, switching to nimbleness of Toto intermingled with pretentious REO Speedwagon, passing to majestic Kansas alongside throbbing IQ. This is a really ambitious modus operandi, to say the least. Of course, you may notice elements of giants here, but these are threads scattered in a tapestry with very original nuances. The end result serves as a wondrous scrapbook of 6 songs with the longest one coming in at 21:28 min. which fits under the banner of progressive rock epic. Whatever a number of influences, Different Light produce a message featuring the addictive vocal interplay and majestic orchestration. So I just had to write this because it’d be a mistake to let a prog mastepiece like CD 'Binary Suns' be ignored. :up:
P