Folk Music that isn't, quite...

I'm a big fan of folk rock and progressive folk, though whenever I've been to see one of the classic groups (like Fairport Convention), I've had to wear ear-plugs.

But there's nothing nicer than belting through the Welsh countryside belting out a Steeleye Span number on the car's cd player:

This one I only found recently, but whatever is providing the rhythmic backing - a didgeridoo or what?

What's with this recent Scottish content here? Ah, the white light and the cross with blue skies.
The Isle of Skye. There are Sons and Daughters of the Gael who speak Gaelic.
Bay-an-uck let, blessings on you.

If you're talking about folk being acoustic or electric, over here in North America,
the biggest reaction, not a debate, occurred when Bob Dylan went electric.
Here's my favorite Bob Dylan trivia, and it concerns a musician who is still the most highly electric.
When Jimi Hendrix recorded his version of Bob Dylans' "All Along the Watchtower",
Bob Dylan went back into the recording studio and remade his version with Jimi's use of his chords.
That's the only time Dylan ever did that.

There was a player, a Scottish player, who came from far awa, his heart was torn in twa,
and now he's cryin', his heart is sighin', for the direct current of his watts.

Here's a photo of the first electrical application of lighting for a village 40 miles south of Moscow.
That could be St. Electra standing there.

I could wait a thousand years now. 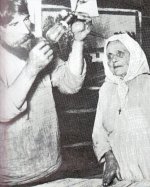 Fairport Convention take this sad Irish song here and give it a groovy beat - not unpleasant, though.

'Folk' in the 1960s really just meant acoustic - and was often associated with protest. Here is a gentle protest against war that was very popular.

Bob Dylan was the King of this type of Protest Song, here with The Times they are A Changing, from 1964.


In a way, this is very much in the folk tradition where lyrics evolve and somebody who sings within the tradition is entitled to adapt the words.

Staff member
Sr. Regulator
When Dylan came to England he met Martin Carthy who taught him this

Thanks, Taggart - I didn't know that. It's very interesting.
Of course 'nicking the tune' is also part of the folk tradition.

When I was starting to sing and play guitar Bob Dylan had disappeared, in a few ways.
He had this motorcycle accident, when he really went into rehab.
And when he started touring again he wore messy white-face and sang incoherently.
You literally couldn't understand the words he used.

If I could put up a folk song it would be "California Dreaming" by the Mamas and Papas.

Where has all the live music gone, it's been a long time passing.
All the gigs and venues fell, now it's just no trespassing.
Where is that stage where I can play, to be paid for being there,
when will I see you dance, and all our love is there to share.

When those signals in the sky, mess up our personal transmissions,
as microwaves penetrate our minds, mutations are what they make us.
When will they ever learn, before we all just burn.

The best laid plans of mice and men,
are aft a gang a-gley.

Donovan was another singer playing acoustic guitar who was considered to be a 'folk singer'. He wrote his own songs. And believe it or not, behind that accent, he was a Scot.

I love the way the beat comes into this ballad, one of my favourites. And the fiddle is fab - Dave Swarbrick?

Dave Swarbrick is someone I really admire - may he rest in peace.
I love the sound of his 'electric fiddle', but it ruined his hearing and in the end he left Fairport Convention and went back to acoustic fiddle.

Here's a favourite piece which treats a classical music favourite in the style of an Irish reel.

The arrival of the Queen of Sheba in Galway Bay - DeDannan

Ella Beck said:
Here's a favourite piece which treats a classical music favourite in the style of an Irish reel.

The arrival of the Queen of Sheba in Galway Bay - DeDannan