Four years on from the debut album ‘Mirrors', HANGOVER PARADISE return with a successor entitled 'Out Of Sight'. The permanent nucleus of this Dutch group contains twin brothers Peter Zwerus & Henk Zwerus (entourage of keyboards), plus skilful bassist Cynthio Ooms. The current line-up was complemented by Henk Brugge (lead singing), Richard Saimima (guitar courtesy), Daniel Brans (drum kit) and MacDrikus (back vocals). Together, they make a superb partnership to offer the album full of excellent melodies, diverse textures, lavish arrangements and emotional vocal delivery. As was to be expected, the new batch continues the style of previous CD, but it’s a significantly better balanced release. All of the compositions here are medium length tracks standing out on their own but provide the consistency of the album. Now I want to consider this colorful work in detail. First off, 'Who Do You Think You Are’. Largely due to the heartbeat-alike sounds, the intro can remind of Pink Floyd. After a short while, the synthesizer swells evolve into intensive playing larded with the lush keyboards, polished guitars, expressive bass job and insistent drums. Instrumental meanderings are ably linked with the voice of singer. Toward the middle, there’s a tranquil component that recalls Arena featuring Rob Sowden. Soon after very surprising change in tone, the song reverts to dynamics. Second cut 'Don’t Wake Me Up’ begins with a gentle execution. Arena's influence pervades the opening part: the instrumentation, the style of vocals in the vein of Paul Wrightson and rather hypnotic atmosphere. Following initial section, the band presents exquisite interlude. Think about Camel, and you will have a good idea of how it sounds. The mellow nuances convert into a sheer dynamic performance, when the music fits snugly within the Saga territory. What next? Utterly remarkable turn of events and the major attraction on the entire disk. The astounding symphonic progressive rock jewel with token name ‘What Lies Beneath’. Try to believe me: it's something monumental in the great traditions of old masters! And beyond any doubt, the best combination within the realm of Hangover Paradise. We hear the evocative vocal input embedded in grand orchestration decorated with the vintage keyboards and piercing guitars. I was blown away!. The title track ‘Out Of Sight’ is verging on Kayak, Opus, Toto, Genesis, Kino, IQ, etc. Needless to say, this piece has a multi-layered structure. Then again, paying homage to Saga, ‘Not Worried’ provides the energetic tempo, swirling keyboards, haunting guitars, evocative bass lines and competent drums. The singer proves his versatility behind the microphone. Warm and melodic piece 'Wrong' segues into a ballad-like pattern. Every accent is perfectly executed, thus delivering a transparent magnetism. (Incidentally, this song has been written for the debut offering - albeit it was not actually recorded on CD before 2017). The next case in point, ‘Life Is Too Short’ which leans toward more commercial groove. I’d call it a radio-friendly material that combines the enjoyable pop and soft AOR. The ultimate chapter 'Flowers In The Rain' ensures a set of fragile ingredients. The Nick Barrett-esque terrific guitars are complemented by sublime keyboard figures, delicate bass loops and precise drumming. Pendragon’s sensitivity permeates the music, while dramatic lyrics can leave a lump in your throat. Actually, Hangover Paradise understand how to elaborate a concrete idea, and when to bring things to a logical result. The effect is a memorable feeling that presents when the album is finished.

So folks…If you appreciate melodic progressive rock, then CD 'Out Of Sight' should be in your collection. ASAP. 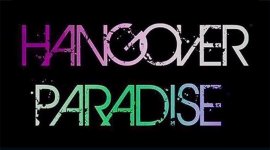 For the first time in over eight months, I'm set up with my computer system and have sound.

"Flowers in the Rain" was meditative at the beginning, growing in majesty, until the beat and vocals began.
Being from the Niagara Peninsula, hearing this Dutch band, I'm thinking that public bombings inspired the lyrics.

The album title, "Hangover Paradise", made me recall "Hangover", a Max Webster song from the early 70's.
They would play this song towards the end of the night as a way of toning down the drinking,
getting everyone ready to wind down for the drive home.
When I did this song in a rock trio the drummer sang it, sounding more like Kim Mitchell.
This live version was recorded over ten years later,
and Kim is the only original band member onstage.

Huh! That's strange. When I clicked the link in my posting, it was the album version.
That meant it didn't have a video, and I really don't like staring at a graphic instead of a live performance.
So here we go again, uh, just like for some, having another Hangover,
and now, a do-over.

After watching the video, I just hafta add.
Kim Mitchell, when Max Webster was a bunch of boys from Orillia,
shared a Fender Jazzmaster body and neck with me, giving it back and forth.
We were trying to wire a humbucker by the neck with two Strat pickups,
and Kim showed up with the first DiMarzio pickups to try out, and they were the best.
That's when DiMarzio only made a "P.A.F. Humbucker", a "Super Distortion", their own design,
and a "Fat Strat", exactly like a Fender Stratocaster, but with a little more volume,
to blend in with the big humbucker.
The P.A.F. was the Patent Applied For that you saw on Gibson humbuckers.
The guitar Kim started out with was an orange Gretch Tennessean,
that he got from a pawn shop in Buffalo, but it was stolen in early 1970.
He never could find another, and used different guitars all the time after that.
I could say a lot more about being friends and hanging out with the band,
but instead of a Hangover, I might start to sob a little and really regret a decision.
yeah... I should do a do-over and update the lyrics, about getting a Headache,
and that would be caused by too many signals from the skies.
You would still have to have a "cold morning in the drums", that's for sure.

Hangover Paradise are focused on the creation of some new and exciting material. While I am not able to provide many other specifics at this stage, but the guys do have a goal of CD-releasing in the early 2020. :tiphat:
You must log in or register to reply here.
Share:
Facebook Twitter Reddit Pinterest Tumblr WhatsApp Email Share Link
Top