Well, it's the Government, do you say they are not to be trusted
We did have, a few years ago SOE's ( State owned enterprise ) a CEO and board were selected by Government and their directions were to run the thing as a business but return a modest profit to the government. but as the new owners (PPE) would be overseas based all profits would go out of the country and even if the government kept 51% of shares the remaining 49%
be gone??

In England a lot of the electricity is supplied by the French. The French goverment forbids them to increase prices by more than 2.5 per cent but over here it has just gone up by 18 per cent. Another danger of outside influence

Back to the NHS topic!

Sorry, I've come into this a bit late. It's easy to carp about the NHS in the UK. Sure, things go wrong, but they always do in any organisation. There are also some important upsides to it. In my mid-60's I haven't found much to complain about since the NHS was founded when I was a baby. And I am particularly grateful my kids have access to entirely free treatment when it comes to surgery. And it's getting quicker, at least in my area. As an example, my son was taken in as an emergency last August (2010) with agonising abdominal pains. We all assumed it was appendicitis, but it was correctly diagnosed as gall stones within 24 hours. By the end of the month he had been admitted and had the gall bladder removed as a day case. Not the slightest complication, and he was fit again within a week or two. He (nor me) would have had the means to pay for a fraction of this treatment.

This month a friend also in his sixties has been recommended to have a template biopsy of the prostate, again as a day case. This was on a Tuesday last week at an outpatient clinic. By the Friday he had received a letter admitting him on 7 September for the procedure. Come on guys, we can't really complain about this level of service!

These examples are typical in my experience. But having said all this, I also maintain private medical insurance for me and my wife while I can manage to do so. Nice when something turns up which it covers, but it doesn't cover things like active surveillance (watchful waiting) for any chronic condition, maternity, dentistry, emergencies such as my son's gall stones, etc, etc. So I'm still very grateful that the NHS is there (which I also pay for of course as a taxpayer).

Yes, we pay twice. I don't know where abouts you live but being near Dover we find there are so many immigrants queing up for treatment that there is often a wait for us. I suppose we should get human rights lawyers to look out for us, but we would have to pay for them. 80% of babies born around here are from immigrants. What chance do we have.

Could this apply Teddy? 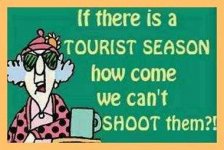 The tax burden for welfarism

It's not just immigrants who milk the system. The least attractive aspect of welfarism (I call it that to avoid getting too political by calling it socialism) is that those who tend to call on it the most pay the least - and often nothing at all because they are on welfare anyway and therefore not working. It is therefore unsurprising that taxpayers - the minority of the population - find it gets up their nose. In the UK, on average a taxpayer gets to keep only about 40% of his/her gross income when all direct and indirect taxes are taken into account. Another way of looking at it means they see not a penny of their earnings until nearly the end of May each year. I wonder how this interesting statistic compares with other developed countries?

In this respect UK taxpayers are not much different in attitude to those in any other country. I like J K Galbraith's summary of the situation in the US because it lightens the mood of an otherwise tetchy subject:

Medicaid is another issue. As for now I'm without it because some yeahoo
got my social security number all wrong.
judy tooley

I am glad to see that a lot of the scumbags whole I would see wandering around at 10.00 am swigging from cans of beer are no longer around. Too much to hope that they have been abducted by aliens (no, he other sort) but maybe they have been deemed fit to work and are actually doing something fairly useful.

Steve, I thought I would revive your thread to ask how you found your recent treatment, and whether you consider it would have been better if you could have funded it privately.

Teddy, I have to say that I was cared for very well; I actually had a private room with all kinds of amenities, including some very attractive female nurses. Of course, I only had to be in for 2 days, but I couldn't have afforded either the operation {Three-thousand dollars for the anathesia {?} alone} nor the hospital stay. Neither could I have on my own afforded the various procedures done on me prior to the operation in order to determine whether I had cancer of the prostate or not {I didn't}. So, let the right call it "socialized medicine" or whatever they wish to dub it, but my health insurance--funded by New York State, my former employer--saved my life, and my bank account. Of course, I contributed towards my family's and my health coverage while working and still pay a monthly premium, but if I had had to fund this medical escapade of mine on my own. I'd be bankrupt.

Good to hear it all went so well Steve. When you think about it it was private treatment, its just that like me you paid for it with insurance, month by month. Even the employers contribution was part of your salary, and over here we are taxed on employers contributions such as that under the "benefits in kind" regime.
We have just heard that th EU has announced that we now have to treat anyone coming to this country, EU or otherwise, legal or illegal, as they have UMAN RIGHTS. In fact an illegal immigrant now officially has more rights than we do as they can obtain treatment anywhere they want, whereas we can only get treatment in our catchment area. These faceless bureaucrats want shooting.