hello! i share with you my new "Violin-Shell" what do you think about?

shell that has a golden ratio is the acoustic box of the violin.
it has thin yet strong walls, straight fibers and open structure allowing it to make sound vibrations.
i remind you that also Stradivari made the violin calculated the "golden ratio"
by fibonacci number that connect us with the chromatic scale.

i try to upload foto here but you can also have a look in my facebook.

my violin on youtube.. please let me know what do you think about that

Very interesting video and theory. I played viola and string bass for many years in my younger days. Like the sound of your instrument. Good Luck with your work.
V

Thanks for the comment!
What style of music do you think will suit this violin?

sure it could be used for any desired musical form.

It's taken me a long time look here, but am I ever glad I did.
This is a very interesting, informative and entertaining video.
I'd like to add something I learned from talking with a sailor last summer,
who said waves flow in cycles, and the 13th wave is the biggest.

Seeing the "violin shell" made me think of "shell-strung".
This would be fabulous to use as a prop in a movie,
or a symphony feature performance for any water themed music.
This really has inspired me.
Now I'm wondering what this man could do with the cranium nasal structure,
of a Humpback whale, something I'm sure would be a lot louder,
and probably have higher frequencies no-one else has ever bowed before.
Imagine playing for the whales, and having them sing back to you!
You have my deepest admiration for creating such an original and beautiful instrument.
I tune my guitar with a tuner in one ear and my guitar touching my other,
but now I'm going to try touching my tuner to other things to see how they sound out.
I can imagine a shell-strung violinist sitting beside a ships' bell-strung violinist,
the humpback nasal cavity propped up like a stand-up bass,
with two sections of shrimp-shell and lower octave crab-shell flutists, oh no.., oh no...
and instead of a cello, a sea-turtle strung player sitting off to the side.

As far as I know, it was Stradavarius' use of old wood from abandoned castles and forts,
that allowed his violins to be built as precisely, and remain the same without any warping,
that makes them valuable now.
He may not have been a mathematician, but he certainly knew what he liked to hear.
I'm sure he would have tried carbon fiber, a more inert and harmonic friendly medium.
If he shaped it as the life-giving hand and arm of God from the Sistine Chapel,
I wonder how that would sound.
yeah... you could have a tuner for every finger to make a five-stringed,
deeper bass, heavy-mental violin.
A new legend could be born, setting it up inside the Sistine Chapel,
waiting for the one violinist who can play it without getting gods' tendonitis.
Two more players featuring the hands and arms of the statue of David,
would be all anyone needed complete this heavenly section.
And don't let French Catholics get in there with Jean D'arc instruments.
As a Canadian, I know what enforced bilingualism can do,
and she was too high-strung to begin with.
Last edited: 2 Mar 2018

I've been seeing my name on the forum for this thread for too long, since early March, over half a year ago.
This is a change of topic, but for me, this incredible offer of left-handed guitar kits is just as different as a shell violin.

For over two years I was looking around the Niagara Peninsula for a left-handed tremolo unit.
I thought I could buy an inexpensive offshore guitar, but they were all smaller with poorly designed units.
That was usually the plate, not having a deep angle or the shallow angle wasn't properly placed by the screws.
The second semi-solid-body guitar I decided to build was getting to the point where I needed the hardware,
using the tremolo unit I have to help build it. It is a full-scale Stratocaster design underneath it all.

In 1972 I had to send Fender $150 to get on a waiting list for a left-handed plate and block, six months.
This summer I phoned Ring Music in Toronto, who custom made my necks for me.
They have Strats going back to the 50's and custom build guitars, a wonderful music store.
John, the owner, said they didn't have anything lefty, no parts, no guitars, surprising me.
He agreed nothing much has changed in the left-handed world.
While we were talking he searched and said he found a 1970 left-handed tremolo unit,
for sale in a music store in California for $5,500. That really made me stop and think.

I was seeing Solo Music ads in Kijiji, thinking what's this Toronto music store doing,
putting up ads every five or six ads or so, in St. Catharines, and for me, jamming up Kijiji.
I decided to look one lonely night, and was totally surprised by what I saw.
They had do-it-yourself mail order guitar kits, and they had many left-handed models.
Strats, Teles, Les Pauls, 335s, their own design, and they were just $10 more for leftys.
The lefty Strat model was $149.95 plus taxes. I looked and looked and had to phone to believe it.
Matt McWaters, and yes, I had to love that name, was very professional and worked with me.
I gave him the measurements of my tremolo unit and his was the same.
He also said if I ordered over $200 I could get free shipping, so I ordered some strings.
Their range of products covered manufacturers I've been sending money orders to,
companies in other provinces and countries, so it was less expensive to get them mailed from Toronto.

This domain has videos where Matt, a bassist in a live band, uses completed guitars as demonstrations.
It has pages of products that are growing all the time.
I liked the kit so much I'm building it, using the body and installing a right-handed neck, just how I play.
For the first few weeks I just opened the box and started giggling,
never seeing so many left-handed parts before in all my life.
If I have one guitar, my instrument, I want it to be natural wood. That's my semi-solid-body guitars.
Now, for the first time, I have a left-handed body ready to go, and I'm doing some decorative paint work.

Another guitar playing friend who has a recording studio, pulled over in his car one night,
when I was walking down the street, He said John, I've been looking for you,
and handed me a Fender Stratocaster left-handed tremolo plate.
Fender makes the blocks so they can be finished right or left-handed,
so I got a right handed block and paid a machinist to make a lefty.
Thanks again, Ron Horton.

I'll consider this to be a bar guitar, what I'm playing in bands in bars, a secondary guitar.
Maple syrup is one of my favorite things to eat, saying I have a cellulose addiction.
Beavers are known for packing some sugar maple leaves, red maple leaves, into a corner of their den,
and when it starts to ferment at the end of winter they start to eat them.
That's a nice thing to say about having a red maple guitar, my bar guitar.
And no... I'm not having some green like legal marijuana. Bars don't make money selling that.

I am using some green luminescent plastic for the pick-guard, a left-over from sign-making.
That would have been used with tracks for changeable letters for a donut shop,
so it's a softer colour, not a hard and shiny plastic.
This red maple guitar concept evolved from a red Strat-style I bought last year.
I was offered a gig as a "strolling troubadour", and I don't like playing acoustic guitars.
They hurt my fingers after fifteen or twenty minutes, when I can play my guitar all day,
bending single strings, double strings, bending chords, riding the tremolo unit, doing it all.
I used this green plastic just because I had some, and wasn't hot on the green and red combination.
But after so many people said they really liked it, I started to like it too.
I used the green plastic to make a maple leaf, but it looked just a leaf made out of the green plastic.
I used some of the nail polish I bought to paint over the exposed wood of the new cord input plate,
on this green maple leaf, and it turned it into a darker sugar maple leaf, really nice.
That's what the photo is about.

I might as well take advantage of my extensive photo library,
and put up two photos to show how a right-handed neck I had was a perfect match.
That was one of the most incredible co-incidences of my life,
this previous right-handed neck being an exact fit on this new left-handed body.
It has a fret-board that extends out past the neck with one more frets.
yeah... more notes... it doesn't get better than that. 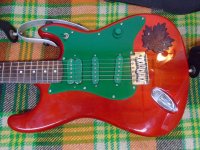 I forgot to mention,
that ever since 1972 I've been installing a P.A.F. Humbucker by the neck,
to be my lead guitar pickup, having Gibson L5 jazz sounds, Les Paul hard rock sounds,
with two single coils for Stratocaster sounds, mostly for rhythms.
The fact this body is routed out for both only makes it better.
I use a Switchmaster toggle switch, what Gibson uses for two humbuckers.
I wire the two Strat pickups together, after ending up using them on together all the time,
so that the toggle switch is on for the humbucker, on for all three pickups, and on for the single coils.
That lets me switch without any break in signal,
and with all three pickups on, it's a perfect volume and tone level for fingerpicking.
That's nice, picking away like a humbucker or Strat, and then throwing in some finger-picking,
without missing a beat.
If I lived outside Ontario, I'd be making a deal with Solo Music Gear and stock up on these kits.
I'm pretty sure if you had left-handed guitars for sale you'd sell them right away.
I'm going to buy another lefty Strat and paint it up to be my aquatic model,
and yes, that could be singing and playing in the rain, or the mist at Niagara Falls.
If I ever do a heavy mental guitar thing, you know this Watt will be on top of the Tesla stature,
and it's his heavy current and bronze metal that will take my pounding riffs.
Last edited: 21 Oct 2018
E

wljmrbill said:
Very interesting video and theory. I played viola and string bass for many years in my younger days. Like the sound of your instrument. Good Luck with your work.
Click to expand...