Staff member
ADMINISTRATOR
Regulator
It's time for an mp3 download...

The piece, "Intermezzo for Brass Quintet" is very small - only takes about a minute to play, yet I hold it rather highly myself

It can also be found as track No. 3 on the CD Light On Your Path
It's performed by the Brass Ensemble of the Danish Royal Guards, who recorded it in 2000. I'm going to upload the score (pdf) later. [edit: done] 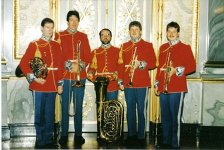 (Brass Ensemble of the Royal Guards)

Comments are most welcomed
P

Pamadu/Paul.
P.S. I am glad the PDF is coming

Sr. Regulator
hmm... - that's a peculiar little piece... - some baroque-scholar would probably be thrilled with this continual "fortspinnung". it's "cute"... but a little "uneasy" i someway do to this contiual no-cadenza type of "intermezzo"...
as to the hornplaying pleasing... well... - I think it's more fun for the trumpets as compared to the lowbrass "hoot hoooot" - but with that said... any addition to the repetoire for the brassquintet is very much appreciated

Staff member
ADMINISTRATOR
Regulator
I'm glad you like it, Pamadu

Corno....hmmm... well, I don't agree with your perception of it being "uneasy". It is very short, and thus you may not have time to get "adjusted", however, that's actually the point: It's like you get just a glimpse of the music, then it's gone...

Can't get PDF Down.??????? Keeps giving me a Message the same as "Hitsware's" Midis...then crashes Puter.

Sr. Regulator
well... it's not that it's "uneasy" as such... might be a bad word in this context... - it IS a intermezzo and as such I think it fits nicely in that it not "dwells" and that it "keeps going"... - but somehow that's the same things that makes it a little, hmm... what's the word... "jiggly"

- I like it, it's not bad at all, and the style is also quite good, albeit "rustic"

- there's one chord around 0.35 (where the horn has a little audible "movement" that dissonates a little, some seconds clashing, just to "abrupt" the "flow" a little - just before it "recaps" the beginning with the other trumpet taking some fanfare-like position and continues to accompany the group towards the end...

EDIT... well somehow it always helps me to get a look at the music - and this time it made it a little more clear that the fact I might find it "uneasy" was the two bars you keep repeating over and over and over

- as to Pauls comment on the "error free playing" I think there's a small stumble from one of the trumpets in the end of bar 9... - yeah... I'm a "clam"-buff

(all in good fun off cause, no "harm" intended neither composer nor work

) - I'm heading off to bed now - going to Sweden tomorrow for a little prolonged "out-back-Sweden" weekend... just to say hi to the mooses. heh...

So have a nice moose-free weekend all of you

Hi Frederik. i have tried as well as pamadu and all we can get when we hit the 'attachment' download button for the pdf is a notice asking us YES or NO to go to this site.
http://activex.microsoft.com/ go to active x gallery.
but we cannot find what we are supposed to download.the same thing was what happened when all the zelsoftware midis came in by hitsware.we have the latest active x and it has all components with it. very very strange regards Jamie.

look at the number of views as compared to downloads,more downloads than views, and it seems to add 3 or more hits when we hit the button.

one day we may get it

BTW. i love the piece as well.it is well done and is 'one minute' of good sounding BRASS/HORNS

jamie... I'll bring my digi-cam but I cannot promise anything... else a random-swedish-chef episode of the Muppet Show should do the trick

hehe... have a nice weekend

Staff member
ADMINISTRATOR
Regulator
I'm glad you like it too, Jamie.

It seems that you have to have a newer version of acrobat reader and IE5 or higher for the attachments to work properly...
P

Thanks....Jamie got it down on other PC with a Higher version of The Reader.....It came out OK on Mine via the email....So all is well Now. Cheers

Hi Frederik,
first of all I'm new to this eminent forum. I like your piece very much, as it embraces the noble qualities of the brass. The first and dominant phrase has a quick and... open-minded taste of motif, an elegant fortspinning and a cool ending comment(imitation). It then lingers on increasing in tension, mainly due to the rising trumpets. It is indeed very, very pleasant to listen to. I do think though, that you trick us a little by letting the tuba end with this lonely ess in the last bar, as a comical artefact. I'd prefer it to end with the others on the third count, keeping the taste of dignity alive long after the ending.
A very enjoyable piece, Frederik!

Thank you very much for your review of my "Intermezzo" - I'm glad you like it! Regarding the end note: yes, it is indeed a humoristic "artefact", but I don't think it is way out of order in regard to the general caracter of the piece - it is after all an only 1 minute long and have a lighter touch to it (even though the piece is dead serious, I'm always serious about music - even when it contains humor). But I do see what you mean.

I have just written a piece myself for Brass quintet, which I would like to present to this forum (and which I'd like to have performed). Is it appropriate?
Regards! Hans