After twenty four years of absence, Swedish band MANTICORE reborn to unveil a sophomore CD ‘Next Step: Flight 19’. This time around, co-founders - Ulf Holmberg (guitar department, keyboards, b/v), Göran Holmberg (vocals, bass courtesy), Putte Saavedra (drums & percussion) - team up with the new singer Jon Sundberg (who plays acoustic guitar as well). Together, they’ve managed to craft an album of relevant quality. Make no doubt, all requisite components are used: the epic constructions and melodic abundance, plenty of diversity and metric shifts, emotional chant accompanied by neat harmonies; tremendous guitars, analog synthesizers and flexible keys, plus efficient rhythmic backbone. These Swedes represent six compositions (including the heritage of giants). The musical journey starts off with a superb instrumental ‘Beginnings’, which has beautiful changes to keep the listener engaged. Initially, it recalls the echo of 70’s Genesis, before morphing into typical Camel-like figures. Next up, the mini-epic titled ‘The Answer’ is perhaps best described as a combination of AOR trademarks intermingled with symphonic prog attributes. The following piece ‘Flight 19’ is my absolute favorite on this disk. And it does really grab me! The vocals are endearing to give the music very distinctive warmth, reminding of John Wetton. In some respects, this harkens back to the early King Crimson.On the other side, superlative guitar work conjures up the memories of Steve Hackett while the tapestry of keyboards may evoke Tony Banks. The rhythm section sounds tight and tasty... The rest of material is strikingly different to the prior substances. Firstly, 'Release, Release'. Being a YES composition from 'Tormato' (1978), it highlights the energy and power, embodies the complexity, unusual tricks and beguiling structures. Once again, the vibe changes in penultimate 'Cold Is The Night', which is an ode to John Wetton (composition from his solo album ‘Caught In The Crossfire’ (1980). Wonderful stuff! The album comes to its close with a tribute to Greg Lake whose original version of 'I Believe In Father Christmas' had been released as the single in November 1975. A lovely ending for the whole affair…Is there any drawback? Of course, I regret the fact that CD has less than 39 min. duration. And my own personal wish would be for the band to make a bit better package. Even so, 'Next Step: Flight 19’ is worth checking out just now. 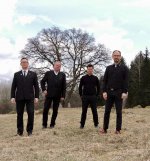 Check out this video montage for Manticore's track 'The Answer'.

I was lucky enough to hear some demo material for the next album. It sounds great.

The band may be quiet, but are not idle. If works proceeds according to the schedule, a new album will be released in late 2021.

Watch this thread for some updates.

Below you can see the front cover and track-listing for a new album 'Elements' which is just released.

MANTICORE was originated in 1985 by Ulf Holmberg and his brother Göran with partnership of Kjell Jansson, Per Saavedra, Michael Lööf and Pär Lindh. Then there were several years of existing, with various changes in line-up along the way, before unveiling the debut CD 'Time To Fly' in 1994. Curiously enough, after successful gigging for appreciative audiences around Sweden and Norway, Manticore disappeared from view... A nearby quarter-century hiatus ends when three co-founders (Ulf Holmberg, Göran Holmberg and Per Saavedra) reconvened to work together. There is always the worry that a follow-up could be something of an anti-climax so I'm happy to report that is not the case. As effect of involving Jon Sundberg to the group's ranks, Manticore have come up with the second studio release ‘Flight 19’ (2018) featuring a rather peculiar assortment of songs - combination of their own stuff and covers, where every ingredient counts. Four years on, the band unveil the third CD 'Elements' destined to take us back again to the Glory days of the early 1970's. The deja vu feeling is present far and wide. While it's certainly a modern recording, you'd swear that much of influences came from legendary forefathers of the style. There is a blameless 'RETRO' feel around with mandatory hallmarks of classic symphonic-prog and the material contained within the set definitely ensures that goal. Methinks, major influences on the album come from the UK bands like Genesis, ELP, Greenslade, The Beatles, Electric Light Orchestra (to name a few) that can be heard alongside echoes of early Kaipa. The perfectly-styled guitar licks evoke Steve Hackett or even Roine Stolt. The use of cathedral organ, Mellotron, soaring synths could give you append clues. If that's not sufficient yet, a refined nod to Led Zeppelin on one song brings a dissimilar colour. Yep, these Swedes have found a cache of unique musical memories and give 6 distinctive compositions for us to hear in amaze. Overall, the blend of instrumental pieces and vocal songs, and there is a good balance between the two types. As far as any parallels with newer bands are concerned, Dynamo Bliss (primarily, '21st Century Junk') and Moon Safari come to my mind too. But regardless of comparisons, Manticore successfully pulls it off without sounding overmuch derivative or trite. The band never employ the long format keeping their compositions rather compact to match inventiveness with the fine melodicism. The rich instrumentation lays out the canvas for beautiful vocal interplay between two singers. It is really difficult to pick exclusive moments because all of the tracks are pretty darn good. Even so, definite mention deserves the auld composition ‘Rain Is Falling' (written back in 1985, and now fully re-arranged). Throughout the album, Ulf Holmberg is in prominent roles of guitarman and keyboardist. Whithal, essential importance of leader can hardly be considered an absolute monopoly, since there is a lot of room for other members to produce the marvellous sonic spectrum. Göran Holmberg takes on vocal duties, as well as providing bass throbs inspired by Chris Squire. Being another frontman, Jon Sundberg adds his lovely singing performance, he also plays organ for the closing number of CD. Putte Saavedra provides the elegant work on drums and percussion. Despite the fact that Manticore have a base configuration, the special guest was brought onboard - Kjell Haraldsson (Hassy Froberg Musical Companion) who's drenching analogue and digital keyboards at instrumental 'The Wood'. Another mention goes to Jonas Dominique for his tasty string arrangement (violin, viola and cello) of track entitled 'Open Your Eyes'. When all of them stand united and focus common signal, they create a genuine vibe.. Conclusion. This new Manticore album will probably haunt my CD player for a long time.
You must log in or register to reply here.
Share:
Facebook Twitter Reddit Pinterest Tumblr WhatsApp Email Share Link
Top