Here is a beautiful video for you. Will you share your videos and pictures
of the stars and planets?Frontier Multimedia - The beauty and wonder of Earth and space
judy tooley

Wow, Judy. Where stars are born ... I'd never thought about it. Thank you for posting a link to this beautiful video.

Very good. Loved the way they faded the Sombrero Galaxy from infered to visible light, made the hairs on the back of my neck stand up.

Thank you for viewing this video. If you will notice, there are some more
videos on that sight that you can enjoy. One is on the earth, the moon,
Hubble telescope, and of course the Deep Cosmos. I love them all for
they are all just beautiful.
judy tooley

I just wonder if Corno or Krummhorn would enjoy this. I can't keep from
playing it over and over. I just love it.
judy tooley

methodistgirl said:
I just wonder if Corno or Krummhorn would enjoy this. I can't keep from playing it over and over. I just love it.
judy tooley
Click to expand...

It is ... wonderful ... love the music in the background, too, so fittingly beautiful.

Thank you for posting this and sharing with your forum community.

The music to it reminds me of heaven. It's so soothingly beautiful.
I would like to hear more comments.
judy tooley

Thank you Judy. The video and music were superb.

My choice for the music of the stars is Schubert's "Quartettsatz" the Quartet for Strings no 12 in C minor, D 703/Op. posth

I have heard it described as the music which causes the Earth to move in its orbit. Whatever that means! Anyway it is a beautiful piece.

Astronomers now have their most detailed view yet of the Helix nebula, one of the closest planetary nebulae to Earth.
The image comes from the VISTA telescope, the world's largest survey telescope, at the Paranal Observatory in Chile. Using infrared light filters, scientists have colored the image to reflect the spectrum of radiation from the nebula. It's the best image yet of the Helix nebula, said Jeremy Walsh, a scientist at the European Southern Observatory in Germany.
Contrary to its name, a planetary nebula does not include a planet. Rather, it forms like this: As a star ages and gets larger, the gas that surrounds it starts to get blown off into a large, fuzzy ball of gas. The star heats up and lights up the nebula, which refers to the molecular gas, ionized metal and dust around it.
The Helix nebula resides in the constellation Aquarius about 700 light-years away. It's quite large - its main ring is 2 light-years across, although its material spreads out to 4 light-years. The star at its center is evolving to become a white dwarf 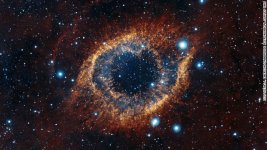