teddy said:
What about the floggings Mike?

That could be arranged, but lets get them out of circulation first.

Sherrif Joe Arpaio is the answer.

Dorsetmike said:
All future births should have DNA recorded and maybe an implanted tag (they can do it for dogs and cats, why not us)
Click to expand...

Perhaps a test before you have the right to breed?

Perhaps a test before you are allowed to breathe.

teddy said:
what about the floggings mike?

the floggings will continue until morale improves!

Even bring back the Stocks

Now we are geting somewhere

teddy said:
assults on teachers are an every day occurance. Yobos rule the streets knowing that no one can do anything about it. Too often we see thugs and criminals walk free even after multiple offences who then go out and do it again.


I can tell that what you described about criminals, thugs, courts and justice is the same over here.
I heard that there are places that choose not to be harsh with the punishment as an ideology. for example, in Norway, I heard that according to law, the maximum punishment sentence the court can impose on the terrorist from Oslo is 21 years in jail.

as for the protests here, I just saw on the internet that terrorists attacked a bus and cars somewhere in the south.
incidents like that is something the protesters were concerned about, apart from the tragedy and the security issues, it is also another opportunity to draw the public attention from social problems to security problems..
that's what I meant when said that someone is benefit from the situation and don't want a change - because while he or they stealing the public money or not taking care, they also have a strong case to say that security is more urgent than social.

meanwhile the parliament went into a two months recess. and government committee formed to discuss the housing issue. I think they are waiting for the protest to somehow fall apart by itself, and if not, they are taking their time, not rushing to find a solution..


no connection to these, I want to show an interesting phenomenon, the sign language that the protesters use in their popular assemblies:

it used in the tent village (or tent city) when people debate about the protest's moves and bring new ideas.
it's pretty effective - one person speaks at a time while the others listen and respond with signs. this way they don't interrupt each other and can get decisions without shouting.
it started in Spain, and Israeli student who lives in Madrid and took part in the protests there, came to Israel and bring it to here shortly after the protests started. 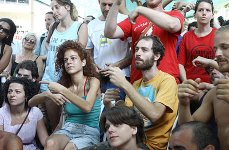 In re to Norway, the presiding Court Magistrate can impose something called "Foervaring" - It is essentially warehousing the perp because his release will cause harm to the society. It is a "sentence" that lasts for 5 years and can be re-imposed for another 5 years and so on, and on, and on and on and on and........And when the perp dies, well, thats it...........

yes, still, from what I understood the Norwegian attitude toward crime and prisoners is more lenient.
you can see that in the way the prison looks http://todayilearned.co.uk/2011/07/24/maximum-prison-sentence-norway-21-years/
Last edited: 18 Aug 2011

southernparks said:
yes, still, from what I understood the Norwegian attitude toward crime and prisoners is more lenient.
you can see that in the way the prison looks http://todayilearned.co.uk/2011/07/24/maximum-prison-sentence-norway-21-years/
Click to expand...

Its not much of a deterrent, more like a Motel room.

British soldiers shot some armed terrorists who were planting bombs and refused to surrender. The European Court of Human Rights decreed that this was unlawful and censored the British Goverment for allowing it to happened. I'd like to see them at the wrong end of a gun. They might change their mind about shooting terrorists.

I bet they would change their mind...


an article that explains about the different approach
http://blog.nj.com/perspective/2011/07/crime_and_punishment_in_norway.html
Last edited: 22 Aug 2011

Leopards and spots comes to mind

I am all for prisoners being rehabilitated, as long as they are being punished as well

And make the punishment fit the crime