Desperately trying to find a job/start a new business/find a project. Going mad being at home and too cold, wet and miserable to go out.
HELP!!!!
teddy

Staff member
ADMINISTRATOR
How about boat building? Or become an apprentice to in a pipe organ builder's shop?

Take up a musical instrument ... do crossword puzzles ... or become a forum administrator and then go completely mad ... :lol:

I plan to build a boat when the weaher is better as it will have to be in the garden. There is nowhere close by where I could do it cheaply. 12 foot gutter rigged is my aim. And the important thing is to get out of the house. I am going stir crazy. There are no pipe organ builders nearby and I do not have the intelligence for it. I hear that there are some good positions going in the South of France, laying by a pool and drinking red wine. I must go and fill in my application form.

teddy said:
Desperately trying to find a job/start a new business/find a project. Going mad being at home and too cold, wet and miserable to go out.
HELP!!!!
teddy
Click to expand...

Have you tried checking your PMs?????:grin:

PS, Lars suggestion of taking up a musical instrument or a different one is highly recommended by the Alzheimer foundation also a new language, I am not joking.
Last edited: 30 Jan 2014

Going into the retirement mode was a difficult change for me, too. I retired from full time work in mid 2006 - I was 58 and took the entire next year to compose myself and think up things that I wanted to do next. Of course, my church organist position has always kept my weekends busy as well as one rehearsal night with the choirs.

So I've been there ... and felt much of the same frustrations that you are going through now ... We get in that work rut, and after so many years of going going going and going, it's hard to put the brakes on and stop or slow down.

A year after retirement, I started working in a Thrift [Charity] shop checking out electronics, TV's, and doing minor repairs on furniture and such. Now, 7 years later, I'm still doing work for that charity shop, but most of the work is done at home now - I took on the financial stuff (reconciling the daily drawers, preparing bank deposits, created an Excel spreadsheet for financial reports, etc), so I'm in the store on a daily basis, usually at closing time.

So, between my church position and doing the financial stuff for that store ... and ... doing the house chores and projects that come with home ownership, I keep busy enough, but still have loads of "off" time to do whatever I want to do. I also take a daily nap in the afternoons now too ... and I get up in time to prepare dinner for the wife who is still working full time. She is set to retire in a year or two, something that I'm really looking forward to.

So, just relax a bit .. I know it's really difficult to do, but you've earned the time off and retirement is another way of life that does take getting used to.

I have never been in the position of being bored or having nothing to do, I retired at 65, an old home on 2 acres to maintain, being able to play golf when I want to, my first computer when I retired, organising a New Zealand BMW Z owners club from scratch, taking up my flute again, hell I was rusty, I just wish I had retired 10 years earlier before the aches and pains of old age set in.

We are also volunteer ushers at our local University performance hall ... our 7th season doing this ... the main perk is that we don't have to pay for the shows we are working as an usher. The performance hall seats just under 2500.

You are very fortunate Lars it’s a good thing Universities have music venues ours only has a capacity of about 360 or so see below:

Our nearest University at Hamilton 2 ½ hrs drive was our venue for Chamber music having the best acoustics in NZ and an open plan seating arrangement (sit where you want) I have been to some wonderful concerts by the worlds great artists unfortunately it is only ever ½ full and has to be subsidised by Chamber Music NZ so now only has the occasional concert.

This is a view from the Car park just a five minute walk. 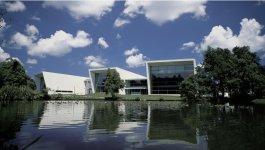 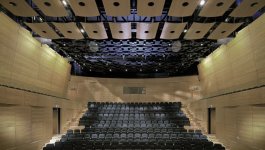 How did this attachment get in on the act????