Should a drum solo "fit" the rest of the piece?

In the piece linked below the drumming sounds acceptable to me as accompaniment but the solo towards the end (around 2.30) doesn't strike me as relevant to the rest Same sort of thing on other tracks of the CD. (I do like the singer tho', Jean Lamb, not heard of her before)

Drum solos... I've heard a few... and walked offstage to allow some...
A drum solo works because everyone appreciates the physical effort,
something everyone can see, but I'm thinking a last resort for a band that isn't hitting it.
Then again, I've never been left alone onstage to perform a solo guitar solo.
Now, if we're talking rhythm breaks, everyone getting into it with various percussion,
yes, now we're talking. Chicago got a lot of bands doing percussion breaks after their first album.
The world of jazz is different.
There is a more scientific approach to your instrument and playing, very demanding.
But even then, listeners think if you don't play a solo, you must be missing something.
And I'm not commenting as if I'm in a dance band with a dance floor in front of me.

While it's up to the individual to decide if the drum solo, or break, is relevant to the song,
playing within the beat or rhythm of the band is best for me.
A Buddy Rich joke, as told on Johnny Carson.
A session drummer in L.A. decided he needed to connect with his roots,
after he saw more progressive players connecting with theirs,
so he took a plane to Africa.
As he was walking out of the plane, he heard drums in the distance,
saying I hear some drums, and the stewardess said "It's bad when the drums stop".
As he was being driven into town, he told the cab driver he could hear some drums,
and the cab driver said "It's worse when the drums stop".
As he was checking in to the hotel, he could still hear drums,
and the counter man said "Yes, it's not good when the drums stop".
Finally, walking down the street, he approached a passerby,
and he said "Don't these drums ever stop?", and the passerby said yes,
but then we get a bass solo.

Speaking about a drum solo "fitting" a song, what about naming one.
When Cream was bombasting away, their drummer, Ginger Baker,
had a huge drum solo, he called "Toad".
That really didn't make sense, famous for his galloping horse style of bass and toms.

When I saw the Brazilian band that recorded with Stan Getz, in Niagara Falls New York,
the drummer got into a solo, and he kept looking at his hi-hat like he was angry at it,
looking at it every once in a while, until he stood up and stabbed it hard,
making everyone laugh. That really fit his drum solo.

In 1970, the drummer for April Wine, when he did his solo,
was on top of a riser that lifted him about twenty feet in the air.
Carl Palmer, of Emerson, Lake and Palmer, rose up about forty feet,
and slowly turned, being able to face everyone in the arena.

Elvin Jones? Even if he was playing solo, he never was alone.
Carl Sagan would sit there tapping with two pencils,
and look what he wrote.

Staff member
The short drum solo certainly does not fit the style of the rest of that track. Maybe that is the drummer's interpretation of the other notes being played by the other instruments; I love dixieland stuff, btw.

When I heard this drum solo, it really did play out like an extension of the song.
I fired up my favorite scanner, sounding happy to be shortening its' life span for this DVD cover,
so I'll let this graphic be worth more than the thousand words I usually get typing.
I'm talking about the John Coltrane tribute.

Dave Liebman came over and sat at our table,
when we saw him playing with Elvin Jones in Toronto,
and the Wheeler Brothers, cousins of Kenny Wheeler,
are good friends, even if I haven't seen them for a long time. 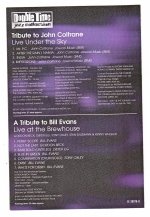 "Bass Solo (Untitled)" by Dieter Ilg,
has to be one of the most interesting bass solos I've ever heard.
Two of my favorite slow songs by John Coltrane are "Alabama" and "After the Rain",
so this set hits it in more ways than one.
"Naima" is nice, but McCoy Tyners' solo version on "Echoes of a Friend",
has to be my all time favorite solo piano, and that's going back to the late sixties.
Last edited: 25 Dec 2017
You must log in or register to reply here.
Share:
Facebook Twitter Reddit Pinterest Tumblr WhatsApp Email Share Link
Top