Should operas be translated into English?

When I was replying to another thread, I thought, pensatitto, cerebulatum, hedskiponderoski, or je pense,
that this is a challenging idea for a new thread, not that "thread" says it all.
This should be called an unwoven foreign tapestry, now reweaving for us all,
the new, global audience.

My Royalty-Free Opera Prospectus: A call to charts for all living, under-employed composers and linquists.
There is a huge, untapped market for opera that has been translated into English.

Now, I can see cultural outcries in all the original languages as being traditional, even classical,
but coming from the Scottish Clan System that brought you the Holy Bible in English,
it's more than possible, with many practical applications for me or any producer.
Look at the success of the Holy Bible in English, and how it spread this language.
Look how many wars that started, something that's a major aspect of many operas,
especially those that are Mediterranean theme based.

Look at the success of the Hollywood movie "Amadeus", in American/English.
He still has too many notes, and his music still has too much of an eternal reach,
but even North Americans and the Oscars loved him.
And it didn't star opera singers, it was just actors with prerecorded soundtracks,
royalty-free, soundtracks. Even Salieri would be forced to agree.

Now, I'm saying opera first as this opera forum,
but how many other cultural stage productions are now part of our consciousness,
coming from Japan, Korea, New Zealand, Iceland, the Haida of northern B.C.,
and yes, everywhere else except Europe?
Think of all the local "little theatre" groups there are, loving this song and dance tradition.
I'm saying any historic, cultural traditions of song and dance stage productions,
when translated into the prophesied global language of Proper English,
could be enjoyed world-wide with the kind of success that could bring.

Right away, I want to invest in "The Flying Dutchman",
as part 5 of "The Pirates of the Caribbean", seeing Corno Dolce as the star,
with a guest electric, lead guitar solo by Wolfgang Van Halen,
only because he can't play too many notes, not without digitizing.
And if I'm the only investor, I can't afford an oceanic production,
so here's a photo of Lake Erie, getting fresh-water with it.

And I'm fairly positive that many traditional opera enthusiasts will have to admit,
that more than any other famous opera composer, Wagner would benefit the most. 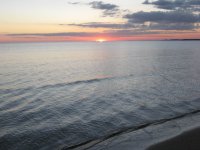 No translation as far as I am concerned..loses the overall ambience..a running translation below or above the performance is fine..but leave the singing alone..IMHO

Never listen to any so doesn't affect me.

My basic concept has survived this onslaught of commentary,
where I can only agree.
Yes, translating the lyrics so the song keeps all of its original integrity,
would be the most difficult aspect of globalizing any opera, in fact, any foreign language song.
But, as foreigners of different languages might say, any dilution of native vocabulary,
would only make the English translation more understandable to them.
And they would be seeing and hearing the history and cultural content for the first time.
If a more professorial approach was desired, this new interest might lead to the original.

I'm like Dorsetmike. I've never sat through, live on stage, VHS, DVD, or cable TV,
any kind of opera. It's not understanding the foreign language that deters me.

I'm sure The Rocky Horror Picture Show qualifies for the many millions who consumed it,
live on stage, where I saw a performance in Toronto, and on VHS, where I had a copy for a while.
I'd also like to mention, that going backstage with my reporter girlfriend, who had free tickets,
a cast member was willing to perform a sex act on me before the performance.
When Rocky came out through the audience, he also sat on my lap, not hers,
something that made the one hour ride back a little uncomfortable.
That's why I'm not including a North American rock opera as a traditional opera,
because they're not. Even Jesus Christ Superstar falls into that category, for me.

But how much is opera a part of my life and ordinary viewing experiences?
It's almost an everyday thing, and look what I'm typing here about myself.
I'm an older man, a professional musician and artist, working on stage plays too,
mostly about hanging out with friends,
but opera is such a huge and dramatic entertainment, it's a shame to miss out on it.
And it's only going to be something new for me, how good is that?

Do I have an opera in me? I think so. My life has been soap operatic for a long time,
but there isn't any kind of opera scene in Ontario, and I'm willing to say Canada.
Has the first, great English opera been written?
I don't think so, or I would have scoped it out.

Look how well William Shakespeare did, translating Giovanni Boccaccios',
"Tales of the Decameron", and it's writing style, into English.
Too bad no-one at the time started the same trend for opera,
or I'd have some opera in my permanent DVD collection,
as small as it is.

There was a recording company that produced an English language version of the "popular" operas round about 18-20 years ago but I can't remember the name, obviously it didn't prove popular.
Last edited: 1 Dec 2016

The only opera hat I have seen translating into English that I somewhat enjoyed was the "Merry Widow"..others I have seen were not as pleasing to me. Perhaps best solution might be to translate some Arias for performance but leave the opera performed intact.

I have searched the www and “bingo” struck gold it was The Chandos label and you can down load and burn your own CDs,

JHC said:
There was a recording company that produced an English language version of the "popular" operas round about 18-20 years ago but I can't remember the name, obviously it didn't prove popular.
Click to expand...

Daughter of the Regiment on DVD

The rest of my sung-in-English are CDs:

Heck you must love you opera, do you have any of the Chandos collection that I linked?

Staff member
Most opera recordings come with a libretto printed in English. I know my LP recording of La Boheme has this, so I assume others do as well.

When I was in Budapest, Hungary, I saw the live performance of Tannhauser. The English subtitles were displayed on a screen above the stage.
F

JHC said:
Heck you must love you opera, do you have any of the Chandos collection that I linked?
Click to expand...

Yes all i listed as Chandos are from that. It happens that the majority of sung-in-English opera is from Chandos. Thanks to them for doing it.
F

Krummhorn said:
Most opera recordings come with a libretto printed in English. I know my LP recording of La Boheme has this, so I assume others do as well.

When I was in Budapest, Hungary, I saw the live performance of Tannhauser. The English subtitles were displayed on a screen above the stage.
Click to expand...

I read that the surtitles at live performances in the U.S. was promoted by Beverly Sills after she saw it done somewhere.

When I was attending live opera (early 1980s) they did not do surtitles. I saw a lot of live operas in Detroit back then, including several performances of the MET. The MET used to tour several cities including Detroit, and stopped that in about 1985. I can't remember all that I saw but some I do remember are Boris Godunov, Magic Flute (twice), Hansel and Gretel, Lucia de Lammermoor, Sweeney Todd (Mad Barber of Fleet Street--a gory story) among others.
Last edited: 3 Dec 2016

I have never been to the opera mainly because it would mean a lot of travel and it is not a genre that I rate highly, but I do love Cluck’s Orphee et Eurydice and if it was on in NZ I would make the effort, I have the John Elliot Gardiner version with Hendricks and von Otter.
Last edited: 3 Dec 2016
F

JHC said:
I have never been to the opera mainly because it would mean a lot of travel and it is not a genre that I rate highly, but I do love Cluck’s Orphee et Eurydice and if it was on in NZ I would make the effort, I have the John Elliot Gardiner version with Hendricks and von Otter.
Click to expand...

Well, you could give it a shot on DVD, or there may even be one up on You Tube.

It's been a while since I've been here, but I've got lots to look into.
Thank you everyone!
For all my talk about being a musician and artist,
if there's one thing that I'd really get into, it's making props for stage shows,
even if it meant making trees leaf by leaf.

Looking through a bin of used DVDs in a store going out of business, all $1 each,
I got an as new Phantom of the Opera, a show my Amadeus girlfriend also took me to see.
Seeing Pantages Theatre all painted up faux pas was totally impressive.
Staff noticed I was peeking around up close and looking under to see if they got everywhere,
and they did. That was the first production in Toronto, early nineties.

I also was looking through books, and read about the original "Hunch-Back of Notre Dame",
a failed organist-composer who favoured the Krummhorn stop a little too much.
That was interesting, seeing where the "phantom" concept came from.
So I did have a little opera in my holidays,
even if freezing sticky ice pellets made my face more white than the phantom's mask.

I think Phantom is derived from the early English Fantom meaning Tomboy.
F

Add to my earlier post (#8) that I now am the proud owner of a complete Wagner Ring cycle (thats 4 operas for about 16 hours total) sung-in-English: The Goodall ring!. And it is a great one!
Last edited: 30 Jan 2017

I might not be able to add more commentary to yours,
but I can pump up some visuals.
It was nice to find the original program from Pantages,
to go with the DVD.

"It took Garnier fifteen years to build the Paris Opera House,
with one hundred and ten architects in tow.
When the work was completed, one of the architects begged Garnier,
to let him stay on, hiding from the sunlight like a spider, living underground until he died.
"Avez vous vu le Fontome?", the Paris Opera staff used to joke,
as they watched him dart from pillar to pillar".

The Paris Opera House also has a lake built as part of basement ballast,
for the stage and building. 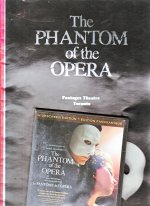 Florestan said:
Add to my earlier post (#8) that I now am the proud owner of a complete Wagner Ring cycle (thats 4 operas for about 16 hours total) sung-in-English: The Goodall ring!. And it is a great one!
Click to expand...

So I believe, Howard Goodall has produced many first rate musical education programs for TV.

"The Ring Cycle" is something I remember more than Hobbits and Tubular Bells.
It's something I never tried to watch, but what I'm reading here is convincing me.

My new Blu-Ray player has a lot of offered media conglomerates for movies, news, doing it all,
looking to see what's there, and the Berlin Symphony Hall, maybe Deutche Grammophone something,
is there, saying it's the leading symphonic hall for putting out videos of conductors and orchestras.