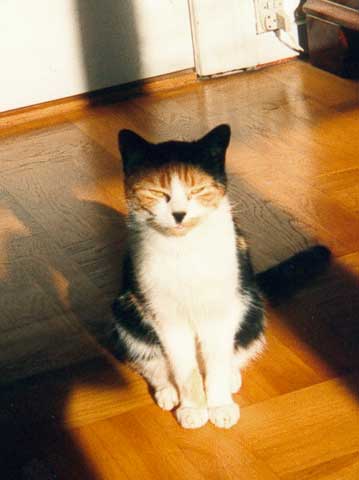 My cat Smilla died the day before yesterday on the 27th of April. She had liver cancer which had begun to spread, and there was nothing which could be done to save her, so this Friday in the early afternoon she was peacefully euthanized. The last thing she saw and heard in this world was me and my mother (who also loved her) talking to her and kissing her goodbye. I laid her to rest in the garden under a blooming apple tree later that day.

It's hard for me to express how dear Smilla was to me, and I know it must be difficult, if not impossible, to understand how close and connected you can get to a cat unless you have experienced it yourself. I can perfectly understand that it may even seem ridiculous, but please bear with me.

I had Smilla for 13 years through both hardships and good times. She was so faithful and loyal it's hard to imagine. I trusted her more than I trust most people and her devotion was unconditional (Not once in those thirteen years has she ever "turned against" or tried to scratch me, not once, and I feel silly for even mentioning that as it was so far from her nature and sense of loyalty as can anything be). Every day when I was in the studio composing she would lay on a blanket right next to me, listening to me working, then taking a nap and waking up and listening to the music again. Every day. Sometimes she would sit on my lap of a while, purring, and making it hard for me to concentrate but most of the time just lying next to me for hours and hours. When she got ill she did not withdraw but instead she got even more affectionate if possible.

Yes, Smilla was very dear to me and I don't even feel ashamed admitting that I wept when I kissed her goodbye, while she left this world.

My sincerest sympathies at this time of loss of a dear beloved pet. You need not feel ashamed of weeping - my eyes were also welled up with tears reading about Smilla and her journey of life and how her companionship was so dear to you.

my cat is called Cindy and she is ten years old now. She is a siam cat, dark brown to a milk coffee colour , an absolute perfectness. She has a very loud voice ( as well as many other siam cats ) and sometimes uses to sing with me together as I exercise some vocal parts . She sleeps on a pillow of my wife and wakes us up in the morning .

That what you wrote is not ridiculous at all. Well, we love them - and they don't live that long.

You know you will keep on working anyway. And this will pass too.

Sorry to hear that. As others have already said, it's not at all ridiculous to feel strongly about a pet – they really are members of the family.

Thank you for sharing your very personal story with us; a warm and beautiful tribute to your fine cat, Smilla. Although it made me weep as well, I`m glad to know you had the company of such a fine cat for all those years. If I could take away the pain, I would, but unfortunately in life, there must be both; sometimes there is joy, and sometimes there is pain. And I wouldn`t want to take away the joy you had with Smilla.

So very sorry for your loss.

Staff member
Regulator
Thank you so very much for your encouraging and comforting words, Lars, Andrew, Sybarite and Robin! I wanted to write about Smilla here, letting you know what a wonderful little cat she was and what she meant to me. She deserved that - and it felt good to do. Your wonderful replies warms me a lot!

All the best
Frederik

I´m very sorry to hear about Smillas dead.
Now you have to buy some mousetraps, I will be happy to donate one...:crazy:

I hope you are okay

Dear Frederik
I am deeply sorry to hear about Smilla I know how fond of her you were I remember you and Mette-Maria talking very affectionately about her when we were at Steve's when you saw Steve's cat (our mascot) the fastest 3 legged cat in the world. I am sure time will help you heal & remember good memories are there for ever.
Vic
You must log in or register to reply here.
Share:
Facebook Twitter Reddit Pinterest Tumblr WhatsApp Email Share Link
Top