Speed limits, do they work as they should?

I contend that speed limits are useless unless rigorously policed. the A31 at Ringwood has had a number of serious accidents, partly due to a couple of places where the road layout is bad, but mostly due to excessive speed.

A lot of the traffic has been travelling down the M3/M27 motorways followed by fairly good dual carriage way over the New Forest, the dual carriageway continues past Ringwood and for some miles beyond.

The speed limit is the national 70MPH but frequently exceeded by a considerable amount, the locals are all calling for a 50MPH limit over a stretch of about 3 miles; to my mind a few speed cameras and a bit more police presence would curb those exceeding 70MPH which would solve most of the problems, closing one joining road, or providing it with a much longer slip road would also help.

A 50 MPH limit will have little or no effect without some strong deterrent added. On some 40MPH and 50MPH dual carriage ways there are speed cameras in town, traffic still travels at 60+ and slows for the cameras, then speeds up again. Some numpties who don't know the area, tailgate and often get caught out when the local in front throws out the anchor just before the camera.

You should come to NZ the B*&%%#y speed cams are behind every tree and pole and you only pay the fines if you can afford to an utter shambles.

I agree speed limits are often inappropriate. Since our village was bypassed I have been calling for a 30 limit on the two, what were, main roads which run through. They are still being used as rat runs due to inefficient traffic calming. A 30 limit on both roads would slow at least some of the traffic and help put people off using them. The top road has a 50 limit which runs downhill, around a blind corner and straight onto a chicane. Quite a dangerous situation. A poor use of a speed limit. However the biggest problem is common sense. Some people will always drive too fast for conditions. A chap I spoke to yesterday hit the vehicle in front of him. The road was wet. BUT I WAS ONLY DOING 30 - he claimed -AND ITS A 30 LIMIT! Idiot should have been doing no more than 20 mph. But he was within the speed limit!!!!!!!!! Better driver training is required and regular retesting including better insurance discounts for advanced training and tests. I speak as someone qualified to teach to advanced levels. It does make a difference.

Hey! You know all those intellectual copywrite warnings on movies with America as first distributor,
where you can face million dollar fines and five year jail time, even if there is no financial gain?
How come cars don't come with similar laws, losing ownership if you use one to commit a crime or kill someone?
Just a thought.
Last edited: 29 May 2013

Staff member
ADMINISTRATOR
As I remember the summer of 2010 when we were in the UK, we checked the local laws on driving and if I'm not mistaken, they allow a 10% tolerance on speed on the Motorways. So anything between 70 and 77 mph would be 'legal'. Correct me if I interpreted that wrong. We drove our rental car past several cameras at 75 mph and were never cited or stopped.

Here, in our local region, we do have speed cameras on several roadways that have become problematic. They are "set" to ignore a cars speed unless they are moving at 11 MPH over the posted limits. I pass one twice a week on my way to church ... the posted limit is 40 and I go through that zone at 49 mph and have never been cited. Other morons though are so fearful of being 'caught' that they slam on their brakes and go like 20 MPH through them, unjustly tying up traffic behind them and creating a far more dangerous situation than had they just gone the posted limit.

We also have red light cameras on accident prone intersections, that also measure speed (if the auto is going 11 MPH over the posted limit).

Lots of people here object to all these red light and speed traps ... of course those who complain are the 'speeders' who don't like being slowed down. All of law abiding citizens (myself included) have no beefs with them, since we abide within the limits of post speed and obey the signal lights.

The do generate revenue for the local governments (city and county) but nobody knows where that money goes.

Some of the later model cars now have 'sensors' that can blab all/tell all to the insurance companies on how that vehicle is being driven so that those who constantly abuse speed limits will be then forced to pay higher insurance premiums. The buses I drove back in the mid seventies had a tachometer chard that was replaced daily by the yard supervisor - that chart told the management exactly how we were treating our assigned buses and how fast and how high the rpms were at any given point.

I'm all for speed enforcement ... and feel we need more camera coverage on our local roads.

One of our government ministers brought in a law that cars belonging to boy "racers" could be crushed, after about 18 months the first on has met its fate.

Staff member
ADMINISTRATOR
I like that news, Colin ... now if only we could get the speedy Justin Bieber's Ferrari crushed.

Why manufacture cars that can exceed more than twice the speed limit?
Everyone who pays for auto insurance subsidizes these speed demons.
Bonnie and Clyde sent Ford a letter thanking him for the new V-8 they bought,
faster than most police cars.
That kind of endorsement should have created modern laws governing speed and manufacture.

Cars can be confiscated in this country for various crimes such as drug running etc. As far as use of speed is concerned who would you rather have behind you. A kid in an old banger doing 70 mph or someone like me in a Porsche doing 70 mph A car which can not only do 170 mph but stop safely from that speed. No contest
And John don't forget that there are countries where there are no speed limits. Personally I would rather drive a car at half its potential knowing I had a really big safety margin at the legal speed limit

John Watt said:
Why manufacture cars that can exceed more than twice the speed limit?
.
Click to expand...

In addition to teddys remarks one of the benifits is acceleration, try getting stuck behind a stock truck and trailer rig that is going at 85k on hilly terrain if you don't have the power you will be there for ever compare that to being able to kick down to a lower gear and floor it you can shoot past in 100 metres or so. all done.

That's usually just when some numpty comes out of a blind side road.

JHC said:
In addition to teddys remarks one of the benifits is acceleration, try getting stuck behind a stock truck and trailer rig that is going at 85k on hilly terrain if you don't have the power you will be there for ever compare that to being able to kick down to a lower gear and floor it you can shoot past in 100 metres or so. all done.
Click to expand...

Right on!! I'm rather pleased with my 180hp turbocharged VW Jetta for those purposes ... when it's safe, of course. Before I bought this car I told my self that I was not ever going to be underpowered on the road ever again. That turbo is also wonderful for climbing mountainous roads - maintains the set cruise control speed without even working up a sweat - and I still get 32mpg overall.

Yeh cruise control is great no more creeping over the limit, 32 mpg is good :grin: on the computer in my coupe it shows that the car has averaged just over 30mpg in the last 25000k town and country

Good point re acceleration guys. I throughly agree. Even my little 2 litre peogut has a bit of kickdown when the turbo comes in and will certainly cruise comfortably at 80 MPH and still gices me an average of 40 MPG. Provided you stick to the very important rule -MAKE SURE YOU CAN STOP SAFELY IN THE DISTANCE YOU CAN SEE TO BE SAFE - you will not have problems. You can not legislate for morons, I have had vehicles pull out at the last moment when I am driving very cautiously. Morons will be morons however many laws you pass. Everyone should take the advanced driving course and certainly within three years of passing the standard test.

My Mazda turbo diesel does about 63mpg, and costs £30 a year Road tax (or Road fund licence as they now like to call it) Top speed is just on the 100MPH, but never tested that, acceleration is more than sufficient at normal speeds on the roads round here and it cruises quite happily at 70 (-ish) on motorways. Higher and more upright driving position, no more backache! Looks like I might exceed the 1,000 miles total for this year, at one time I used to put in over 20,000, but fuel was way cheaper then!

I can not remember the last time I went for a drive just for the joy of it. With the price of fuel at the current level I consider where I am going and whether I can do two jobs in one trip. I will be interested to see what the fuel consumption is like on the trip to France this Summer where I will be in 5th gear most of the time. I will make sure I have a full tank before I come back on the ferry. The French are paying Euros for what we pay in pounds for diesel.

Morons! They should be limited to a Citroen 2CV .......that'll show em 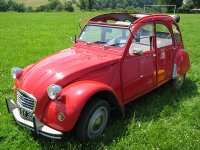 The law in France used to be that if you failed the driving test three times you were limited to a 50 cc car. Probably like the old invalid carriages we used over here in the old days. Even better than a 2CV.

It beggars belief that a young joker having just passed his test is then permitted to drive the most powerful car/bike that is available, I am not concerned about his well being :grin: purely my own and other innocents
You must log in or register to reply here.
Share:
Facebook Twitter Reddit Pinterest Tumblr WhatsApp Email Share Link
Top