Speed limits, do they work as they should?

Yep, after passing the test, limit them to a range of low powered vehicles for 5 years, then retest to see if they are fit to progress

Mike when I passed my test all that I could afford were very old slow bombs. My first was a 1935 Morris 10/4 lasted a few years then a MK1 Standard Vanguard wow I had it made.

My first was a late 1940s sit up an beg Eord 8 van which somebody had put windows in the back and an old bus seat for a back seat, cost me £70 in 1960, steering wheel had near half a turn play, it jumped out of second gear, unless you held it in, tyres were near smooth, and only one brake worked properly, the petrol pump packed up after 7 miles and you had to wait 20 minutes while it cooled down enough to do a few more miles. set of seals sorted that; I passed my driving test in it, then drove it home from RAF Cosford to Poole (about 150 miles) overnight!

Father was stores manager at the local Ford main dealers, he took one look and nearly had a fit, it went straight to the "works" and used it as instructional material for the apprentices, it was there for 3 days and cost me £30, father was very good friends with the local scrap merchant so spares were no problem, including part worn tyres.

I had that nearly a year then the mother in law (read dragon) stumped up deposit for a 2 year old Ford 100E estate ex some petfood company rep (the original Escort). I kept that until after the dragon passed on leaving money which financed a new Ford Cortina Mk1 (£722/10/8)

With Father working for Ford dealers what make would you buy? I went through most of the models, Classic, Corsair ("friend" rolled it into a telegraph pole!) Bedford Dormobile (for 2 weeks) Prefect, 3 x Consul Mk2, Zephyr M3 and Mk4, Cortina Mk2 and Mk4 estate, Capri Mk2, Escort Mk3, Fiesta. After father died in '74 I did have a few other makes among the Fords, an Opel, Citroen BX 19RD estate, then in '93 found a 1962 Classic and kept that 10 years, I had a cousin who did the mobile mechanic bit, he did most of the major work. Finally gave that up when I reached age 70, no longer fun to work under or over it!

Favourites out of that lot, Consul Mk2 375 (the last of the Mk2s with disc brakes) Citroen BX, excellent for towing the trailer tent, the later Classic, and the Mazda 2 (the 2003-07 model)

Wife had a few cars around that time, Fiesta, Peugeot 205D, Then we both went to Mazdas, the 2 pictured above - which step daughter bought, a 323 saloon, Demio estate and I now have another 2.

At one time I was with a Ford dealer in NZ and was given a 100E van as a Co vehicle very reliable but a bit lacking in the power dept I have since had 2 new ford Fairmonts not a bad car but on the last one the drivers door fell of on the way home the service manager said "yeh they are heavy doors" ????????? that was my last Ford!

PS. I see Aussie are to loose their Automotive manufacturing industry how many jobs that will cost is frightening

Another memory has surfaced overnight, on the Morris one of the tie rod ends had a habit of jumping half out and causing a bit of a steering wobble so I secured it with electrical wire:crazy: good thing it's top speed was only about 40mph.
Last edited: 3 Jun 2013

My first car cost £25.00 A Ford Anglia 100E. Did lots to try and make it go faster and look faster including lowering the suspension. Trouble was I spent as much time under it as in it

For a 100E you needed an aquaplne head, a better maniflod and a twin choke carb. Or like my Classic a bored out Mexico block, twin choke Weber and 4 branch manifold with straight through box and a cherry bomb tail pipe, sounded awsome, I once set off a couple of car alarms when I put me foot down!

JHC said:
It beggars belief that a young joker having just passed his test is then permitted to drive the most powerful car/bike that is available, I am not concerned about his well being :grin: purely my own and other innocents
Click to expand...

Dorsetmike said:
Yep, after passing the test, limit them to a range of low powered vehicles for 5 years, then retest to see if they are fit to progress
Click to expand...

I personally believe that each new driver should be assigned to drive a 40' bus for their first 5 years of driving. That will develop two primary things: 1) correct turning and not cutting every corner, 2) realize firsthand that a 20ton bus with air brakes does NOT stop on a dime when some dooshbag cuts them off.

As a former professional bus driver, I have great respect for those large behemoths ... they are actually fun to drive ... to this day, I back up solely with mirrors as I did when driving those rolling billboards. I got nicked points off my driving test years ago for not turning my body or head to look behind me ... I can see lots more through the spot mirrors than I can looking over my shoulder ... one cannot "see" the curb for parallel parking when looking over their shoulders.

My Anglia had a shaved head to raise compression and a relieved block for the side vales. A high lift cam, blue printed manifolds a two inch Weber (downdraft) with accelerator pump and a four into two into one exhaust system. I then got hold of a close ratio three speed gearbox (saved a lot of faffing doing the conversion to a four speed). Lowered suspension front and back and 4 1/2 J wheels. Fast acceleration but hardly ground breaking top speed.

After seeing your pathetic results obtained by tweaking I decided to let you into my secret of re-powering I ordered a Japer two stroke diesel engine. It was a tight squeeze but I love a challenge. 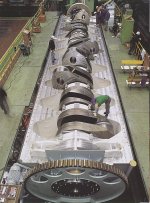 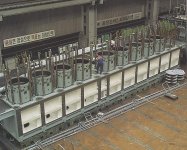 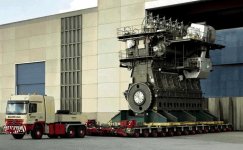 This must be the ultimate though

I have actually seen this car as he used to use the Hovercraft service near me to get to France. The bonnet really does go on forever. I heard that he won his case to retain the Rolls grill as the engine was from a Rolls. Originally he tried a manual gearbox but could not build a clutch that would take the power. The car caught fire and to my knowledge was distroyed, but maybe somebody knows differently.

Dorsetmike said:
This must be the ultimate though

Mike, I worked on those Engines in my youth.

Anyone know what the top speed of that Rolls was?

Speed limits are working in France. The French rarely exceed the maximum speed limit on motorways (130 kph / 81 mph) The English, Dutch and Belgians do but rarely the French. They have been frightened into submission by the dreaded (and often mythical) speed camera. The worst drivers at the moment seem to be the Belgians. Speeding, often tailgating and erratic, they have taken over from the French as number one nuisance.

Staff member
ADMINISTRATOR
The main problem with "speed limits" here is that lots of idiots think that "speed limit" is the minimum speed that everyone should go, whereas it is the posted maximum for the road or conditions in the area.

We do have speed cameras set up around the city ... and they are setup for 11 MPH over the posted limit ... but the idiots, the same ones who believe that 40 means minimum, are the ones who slow down to 25 going through a 40 MPH limited area with a camera.

I personally like the cameras ... a road I frequent has one where the posted limit is 40 - I go 49 through the camera coverage area and it does nothing (lights will flash if you exceed the 11 mph allowance.

I only know this from a friend who got caught ... I haven't had a speeding or moving violation ticket since I was 17 years old.

Thinking about minimum speed limits I seem to remember that when the M1 was first used it had a min speed. this is really a good idea as it keeps all the slow old dudes in weeny cars and things out of the way.

Yes I remember minimum speed limits but they have disappeared. Having said that people do occasionally get booked for driving too slowly. The last case I can remember was an elderly lady on a motorway doing 18 MPH. They still use a minimum limit on French Motorways which if I remember correctly is 40 MPH in the overtaking lane on level ground in good weather.

How about the Autobahn that has a top limit in places does it have a minimum?

I believe that sections of the Autobahn are still unrestricted but I don't know about minimums. I was watching a program about American highways where an Enlish motorist was pulled over because he was driving 15 MPH below the speed limit which was deemed inappropriate. Maybe Steve would have some information regarding speed limits in America.

Staff member
ADMINISTRATOR
In the US, one can get a ticket for going the speed limit ... especially if the conditions warrant slower driving because of weather or road conditions.

When I was on travel last year driving cross country and back, I did go through some states that posted minimum speeds and maximum speeds on the same sign.
Law enforcement usually gives some tolerance on the limits, except in Oklahoma's Toll Roads ... the speed limit is posted along with the words Zero Tolerance!

When we were driving in the UK, I thought I remember reading that they allowed 10% tolerance before citing ... of course, depending on weather and road conditions.

I can remember back to 1992 when on a choir tour, our bus was on the Autobahn outside of Frankfurt ... a little black dot could be seen to the rear, and 5 seconds later it zoomed past (our tour bus had a rear compartment that faced backwards below the upper deck seating). But when getting near the major cities, the Autobahn posted limit was 80 kmh, and everybody slowed to exactly that speed ... there were cameras on all the bridges going over the Autobahn ... we were told the fine (in 1992) for speeding was equivalent to $1200 US ... and they got their picture published in all the papers.