The construction of a new pipe organ in Jørlunde Church

I have recently been hired as "organ consultant" - together with the organist of Jørlunde Church, Gunnar Svensson - for the construction of a new pipe organ. My job is to design the "list of stops" (disposition) and the tonal character of the organ, both overall and for the individual voices.

It all began when Gunnar Svensson asked me if I would like to join a competition held for the best disposition for a new pipe organ in Jørlunde Church. He had invited several organists (with special technical as well as musical knowledge of the instrument) to submit a proposition. I'm happy to say that he chose my suggestion

A week later the Church Council asigned me as official organ consultant.

Jørlunde Church (Sjælland, Denmark) was build around the year 1100 and is world renowned for it's amazingly well-kept medieval church wall paintings (chalk paintings) as seen here: 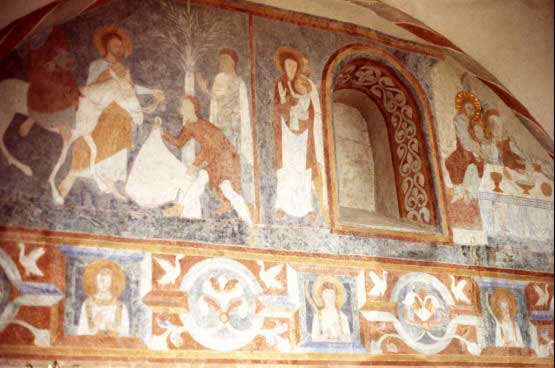 It is expected that the organ will completed sometime late this year (2005) or in the beginning of 2006. The architects Johannes and Inger Exner (whom - amongst countless other projects - was responsible for the re-contruction of the castle Koldinghus) has been assigned the job of drawing the organ facade and housing, but an organ-builder has not yet been chosen. Gunnar Svensson and I has had some very interesting meetings with the Exners.

It has been decided that the new organ must be of the highest quality, using the finest craftsmanship and materials. The total budget will be more than 450,000$ (US) but the result will be one of excellence and the instrument will be constructed to last at least 300 years - possibly much longer.

I cannot yet post the final stop list, because there may still be minor changes, but I will post it as soon as the construction has begun.
For now I can tell that the current (and probably final) disposition consists of 19 voices, 24 ranks and 1292 pipes ranging in height from a few centimeters to five meters (approx .16 feet). The organ will have two manuals (Great Organ + Swell Organ) and pedal.

I'm looking very much forward to the completion of this project and will keep your posted on the progress!

Congratulations.Its interesting only two manuals.Are two manuals enough for the musical requirements of the church?Is'nt there enough space for a third manaul and the required extra pipes or is the third manual option too expensive?Good luck with the project.

Staff member
ADMINISTRATOR
Regulator
Well, Jørlunde Kirke is not a big church so the space is limited to acommody approx. 19-20 voices in total - especially since the tonal character will be rich with a good selection of 8-feet stops and 16' Basun (Trombone) in the pedal. With "only" 19 voices, I much prefer to have two fully equipped manuals rather than three scarcely useful. Had the organ had 24-25 or more voices I would have considered a three manual option. Btw. the organ will actually have 23 stops as some borrowing will occur in the pedal in order to save space.

Anyhow, a skillful organist should find no trouble playing almost any organ-literature he or she would like to play, even with just two manuals. Not least with the voices available in this organ. (As I wrote, I will be posting the List of stops as soon as the formalities has been cleared).

The organ is now put out to "competitive tendering" with three different Danish organ builders. They will each present their solution on how to construct the organ aand the price on July 1st (2005). Then it is up to the church council (with help from their advisors; myself and the local organist, Gunnar Svensson) to decide which builder gets the job.

Tomorrow, I will be going on a one-day trip on "Sealand" and "Fyen" (Danish islands) - along with Gunnar Svensson - and visit newly build organs by the three organ builders to get a better impression of their individual style.

After a builder has been selected, the organ project needs to be "approved" by the Danish Ministry of Ecclesiastical Affairs. When that is done, the construction can begin. I will post the complete detailed stop list as soon as I can, but not before the construction is ready to begin (minor changes could still happen until then).

Staff member
ADMINISTRATOR
Regulator
Well, tomorrow's the big day. I'll be in meeting all day with the three competing organ builders, the organist and the architects. We are going to decide who gets the job!! I'll let you know how it goes as soon as I can reveal the result...

Then it will also be time to post the full stop lists and technical specifications of the instrument.

Anyhow, friday we (the organist, the architects and myself) had meetings with all three organ-builders one after another for 10 hours straight! We try be meticulous in our approach. Today (monday), Gunnar Svensson and I had an additional meeting with one of the builders to get answers to a few unasnwered questions and Gunnar and I have now made our final decision which we agreed on, and the architects approve on as well. It was a VERY tough decision as all three organ-builders are of the highest standard and qualifications, but it had to be made...

The organ builders has not been informed yet (just decided three hours ago!) so I won't reveal the name until they have all been officially informed on out decision.

Thanks for posting this it. Looking forward to progress with interest.

Staff member
ADMINISTRATOR
Regulator
As promised, here is the full stop list (disposition) of the upcoming new organ in Jørlunde Church, Denmark. So far it is still a "suggestion" and will remain so until it has been officially approved by the Danish Ministry of Ecclesiastical Affairs, but so far both the church council, the local organist and the organ builder has approved of this disposition:

Update, October 2009: The complete and finalized stop-list, including a thorough description of every voice and the thoughts behind them and the organ's tonal character as a whole (still only in Danish, sorry) can be found HERE. I will be working on an English translation of this document as well.

Update, March 1st, 2010: I've uploaded a new article about the organ in English. It's not a translation of the Danish article, but rather written from scratch. However, it goes through the stop list in detail in the same way and include the complete specifications. Read it HERE.

As to size, I play on a 20 rank organ and I absolutely love it. It's an 1892 Hook and Hastings, in original condition, and the sound is spectacular in the small church.

Your specification looks useful. It's hard to judge too much from a stoplist, as everything depends on scaling and voicing, but in general, that's a useful design. I'm assuming it's not tracker action, if there's borrowing? (It's possible on trackers, but complicated.)

Staff member
ADMINISTRATOR
Regulator
The government help pay for the organ because Jørlunde Kirke is part of the "state church" (lutheran/protestant). The majority of churches in Denmark are in fact state churches. It's of course volunter if one is a member of the state church (or "people's church") or not, but all members pay a church tax (a little under 1%). About 80% of the entire population are members of the state church (yet Denmark is generally a very secular country, so membership is to many more a cultural tradition rather than a religious statement). This thread is of course not, nor should it be, a discussion about religion and the church, so this was just an attempt to explain the background why the government is involved, and now back on topic

Indeed, everything will depend on the voicing and scaling, which will be done - though not as an exact style-copy or replica of Danish romantic 19th century voices, yet still complementing the 1870 Demant stops.

It will in fact be 100% tracker action! Action, registration and couplers - including derived and extended stops. The main reason for the borrowing occuring in the pedal is not to save money, but rather to save space, so the organ will be in harmony with the room in which it stands -both musically and architectonic.

Maybe thats a stupid question - but when do you think the project is finish?? It must take a while.... But how long? I really can´t imagine...

Staff member
ADMINISTRATOR
Regulator
Not a stupid question at all, on the contrary. The project will take a little longer than originally hoped (but that doesn't come as a big surprise), so it is expected that the organ will be ready in the first half of 2007. First we have to wait for the official approval, then the organ builders (which btw. are the company Frobenius) have to finish a few other works before they can start. The actual contruction phase of the organ will take up to a year...

Wow - that´s a long time. But I understand that it is a big project. Good luck!!

Very nice, Frederik. I'm sure you must have figured out by now that I would approve of a tracker! lol (Not that my approval is necessary. . .)

The borrowing on the pedal is nothing to apologize for. That's one judicious use of borrowing that can work. Many really fine 19th century American organs (including the 1892 Hook and Hastings I play) had only two pedal stops--a 16' Open Diapason (Principal) and a 16' Bourdon. You have to use couplers for the rest. For the most part, it's not a problem, and you'll have a little more flexibility with this instrument. The real trick, as I mentioned, is the scaling and voicing, and to some extent the case layout. But tracker action tends to keep builders to more traditional case layouts, which usually sound the best.

Best wishes as the project continues!

Staff member
ADMINISTRATOR
Regulator
Heh, I imagined you would approve of the tracker action

Btw, the organ is being mentioned in the September website news section of the well respected British magazine The Organ.

Out of curiosity, Frederik, is this organ now up and running?

Is there a picture of it or a video of the construction?
judy tooley

On October 25th (2009) the new organ in Jørlunde Kirke (Jørlunde Church) will be inaugurated! The final disposition is as originally planned with two exceptions;

The Great organ mixture is now 4 ranks instead of 3.
Also, the 4 "Demant" voices will be made with new pipes build as replicas of the 1870 Demant pipes.

Staff member
ADMINISTRATOR
Regulator
I took some pictures of the organ today. I will be visiting the construction site every week and take more pictures (and video) along the way. To begin with here are two pictures, one of the (incomplete) console and one of the (mechanical) tracker action below the manuals (keyboards).

The entire casing is made in massive mahogany and the manuals are made of ivory, everything in the highest quality possible. More pictures will follow soon.
J