To all the old gentlemen

Do you still listen to cassette tapes, I know it is a bit retro but I tried my old Sony a few weeks ago and it was in a sorry state with many mechanical knocks and heaps of wow and flutter, remember that term???
Now I have quite a bit of really good music on cassette so I took it to a man in Taupo my nearest town and he said a couple of new drive belts would fix most of the problems so two weeks later and $60 lighter I brought it home, still a few audio problems but a good clean of the rollers etc and demagnetised the head plus the first time of playing these old tapes I have to fast forward and back before they play ok and some times have to do a restart but on the whole it is working fine and hearing stuff again that I last heard over 20 years ago. Dead chuffed.

I too have a number of cassette tapes..really need to transfer them to CD I guess.. have the electronics to transfer VHS tapes to DVD which I also need to do.. Retired so really no excuse .Just find time for so many other things,,LOL Enjoy them as many hours of good music are on them too.

I'm still transferring vinyl to CD, I'll get to the tapes eventually. I already have a round tuwitt so I have no excuse really

Staff member
ADMINISTRATOR
I have a large collection of cassettes ... my Jetta has both a cassette and Cd player, so I can use either while on the road. My home audio system also has a dual deck cassette recorder/player as well as a LP turntable.

Yeah, I'm still old school in some ways ... but most of my music collection is on vinyl (a few on slate believe it or not - that's just how old I am ... :lol.

My set up is similar Lars I have a turntable, Cassette deck set up to record anything from the preamp and a top class receiver which I can no longer use as FM reception has been allowed to slip but it is capable of digital radio reception which is a long way off for NZ.
I also connect the system to our local classical station via 'My Sky' which produces decent audio.
When you say "slate" is that the same as shellac? I have a TT in the shed that plays the old 78s + 45 - 33 - and 16 rpm for speech only of course 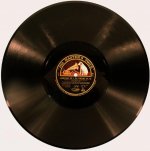 I have too many of everything: LP, Cassette, CD, DVD. I have a Sony component system upgraded with JBL 26 bookshelf speakers. Not the really best sound, but adequate for the oldies. I can play 45/33 discs, Cassette tapes, CD and DVD. The Cassette component is a dubbing model, and I can record anything played on the LP or the DVD/CD player, Video from my TV setup. I have not yet figured out how to record the organ, but that is mostly laziness. I've got cables, after all.

This is what I'm using right now.
I was reading the Toronto Star and a reviewer was wondering
why Sony would put their best CD and cassette motors in such a small unit.
No eq's or anything, just a straight cassette recording off the radio or CD player,
with an input for anything you can plug into it, same with an output.
I went to the Source to ask about it and bought the first one for $88.
After realizing what I had, and getting over the clock radio sizing,
I bought a second, getting it for $40, a return.
The store owner said you had to press the play and function choice buttons,
twice sometimes, disappointed customers forced returns on him for that.
This means I went from cassette to CD only five years ago.
In Ontario, CD's were sold for over eight years before personal burners were sold.
The bigger the tape, the stronger the magnetism and the deeper the tone.
I just left the Yo-Yo-Ma recording out for show. Solo cello here is boring.
Those are Altec Lansing speakers offered very generously by a supportive businessman from Thorold.
I don't get tired unplugging the Sony and plugging in the computer, being a plughead myself.
And yes, I still lick nine volt batteries for some guitar effects.
Huffed and puffed.

I do admire a tidy work station not all cluttered like mine and the Camel cigys bring back memories.

JHC! You are more accurate than you know, as far as work station goes.
The painted blue wooden "table", is one-half of a previous sign shop work table, 2' by 8' long,
that I built over thirty years ago, a Port Colborne souvenir. It's still rigid and level.
The peacock blue colour is from the last quart of retail stocked 1SHOT sign paint sold in the peninsula,
bought at a drastic reduction. I liked the colour, getting the last two cans.
The other half of the blue work table came together to make a four by eight surface.
Those are decorative, retro Camel cigarette cans, used to hold business cards, a nice filing system.
Two are for cards from the past, and two are for more recent additions.
I bought eight at first, four blue and four beige, but friends seeing them made me give the beige ones away.
They wanted them to store reservation cigarettes, bought in bundles in plastic bags.
The cassette holder under the Sony unit is a memento of a friend who passed away two years ago.
The eight Spiderman lunchbox style boxes, made of metal, stamped a little 3D,
are computer disc holders, my computer off to the right. I got them at a ridiculous price when Kresge's went under.
You can imagine why they weren't selling as lunch boxes, if they're a size for holding discs.
There are two different graphics, using four for my personal enjoyments, music, art, anything,
and four for the political and legal stuff.
Wandering around down one day, in a holding mode, I found another Spiderman lunch box that was different,
having a Spider sense graphic, saying he was using it to fight evil in his city. That made me feel better,
and was another ridiculous price, Woolco, a derivative of Woolworth's, going under.
The briefcase behind everything holds cassettes friends made of bands and jams I was in, souvenirs.
The blue board to the left, on the other side, hangs all my rulers and measuring devices.
The Van Gogh poster, a Dollarama purchase, represents my biggest art influence as a teenager,
seeing Van Gogh as drawing with paint, and painting vistas of nature and countrysides outside,
what I still like to do.
The white foam board is part of the Van Gogh divider for the wall behind so things don't fall behind the blue table,
and acts as a kind of nightlight in the dark when I'm reaching to use the Sony unit.
The whole blue table is propped up by road cases for speakers I use that I don't use road cases for any more.

Tobacco and my Scottish metabolism!
I can't smoke cigarettes. When I take two or three inhalations,
that feel like a club hitting my lungs half-way down my chest,
I start to feel pins and needles at the back of my scalp,
the glands in my throat start to act up and juice up my mouth,
and then I start vomiting.
I can smoke a bonfire and sit by campfires and enjoy that.
My parents also taught me to hold my breath when I'm walking around cars,
trying not to inhale the exhaust. I still do that and avoid walking along busy roads.

The Camel cigarette trays bring back memories for me too, why I bought them.
My parents stopped taking me to my one aunt and uncle's house,
when I was the only child walking and talking, the eldest of three brothers,
because they came in to see me rolling cigarettes for my aunt,
using tobacco from a Camel cigarette tin she used.
A recent movie about Arabia when Americans first recognized the oil patches on the sand,
featured a lot of camel action, an animal I admired as a child reading National Geographic.
Despite all my Scottish talk, I only have a yearning to visit Egypt.
My parents sent to the New Zealand government for information about moving there,
when I was in grade two or three, a dream of theirs.
Last edited: 19 Dec 2014
You must log in or register to reply here.
Share:
Facebook Twitter Reddit Pinterest Tumblr WhatsApp Email Share Link
Top