I trust that your Differential Geometry is up to snuff then.......

I told them but they would not listen.lol

JHC said:
Comrade CD, Glad you enjoyed my little BB thing I must stress although a Professor I am purely a lay man, Mr Peebles you say that will indeed be of great interest, this is a catchy little ditty that is in keeping with the subject:
http://www.youtube.com/watch?v=-ND13TmXdmo&feature=related
До свидания
Click to expand...


He is a hard read ?? I must see if there is any thing on the www thingy and Пока пока пока to you sir lol

I see the mods have removed a post by tayyab another spammer lol, the thing is he still gets through to all posters of this thread complete with his link so he did have a win.

Girt with many a blazing star, Orion, the Hunter, is one of the most easily recognizable constellations. In this night skyscape from January 15, the hunter's stars rise in the northern hemisphere's winter sky, framed by bare trees and bounded below by terrestrial lights around Lough Eske (Lake of Fish) in County Donegal, Ireland. Red giant star Betelgeuse is striking in yellowish hues at Orion's shoulder above and left of center. Rivaling the bright red giant, Rigel, a blue supergiant star holds the opposing position near Orion's foot. Of course, the sword of Orion hangs from the hunter's three belt stars near picture center, but the middle star in the sword is not a star at all. A slightly fuzzy pinkish glow hints at its true nature, a nearby stellar nursery visible to the unaided eye known as the Orion Nebula 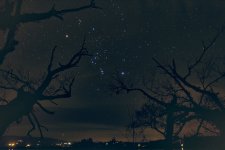 GB that must have been photoshopped

Don't really know colin. It is not my work. Found it on the web on a NASA site. It only states that it was taken in Ireland.

A large coronal mass ejection occurred on our Sun five days ago, throwing a cloud of fast moving electrons, protons, and ions toward the Earth. Although most of this cloud passed above the Earth, some of it impacted our Earth's magnetosphere and resulted in spectacular auroras being seen at high northern latitudes.
[FONT=&quot] Pictured is a particularly photogenic auroral corona captured last night above Grotfjord, Norway. 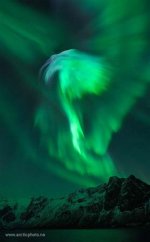 What a shot!!! Living in Moscow certainly occludes my possibility of seeing just about all phenomena - There is just too much light pollution...

Great photo Rob. We too have a problem with light polution caused by the airport, roads etc.

What beautiful pictures! Orion's constellation and an aurora that looks to me like an
angel from heaven. It's just beautiful!
judy jennings

methodistgirl said:
What beautiful pictures! Orion's constellation and an aurora that looks to me like an
angel from heaven. It's just beautiful!
judy jennings
Click to expand...

Looks like an Eagle to me! any other suggestions

Maybe a butterfly? Although my first impression was angel.


I agree with that, too ... the eagles beak facing towards the right and down a little.

It is an absolutely stunning photograph ... to be in that hemisphere to see these creations has to be wonderful. I used to live way up in the Pacific Northwest (Washington State) and would see these during the summer months - absolutely beautiful to see.

Krummhorn said:
I agree with that, too ... the eagles beak facing towards the right and down a little.

My left the Eagles right, are there any psychologists here ?? :crazy::crazy: and the Wings don't forget the Wings

Thats quite enough about rock bands