Before I make people angry - I don't hate Haydn, there are several pieces by I him I think are extremely original and fantastic in every way.. but I simply don't listen to him very much at all, and I think there are sadly alot of people that think the same.....

My theory for this is not just people and I dislike his music because of opinion - but rather Haydn was too good. He mastered the Gallant Classical era style of music, and pushed it in some ways which laid the foundation for Mozart and every other composer in the classial era after him. What I am getting at is his mastery of the "classical era" form makes his music seem dull and unpredictable, yet there are loads of original and maginificent pieces out there that I have yet to discover, and I hope it sparks mine and many others interest in the works of one of the most influential and important composers of all time.

I hope others can understand my point of view, I think it is fairly accurate.

Hi vandexa2 nice to meet you.
I just cannot accept that he is dull and unpredictable, if he was unpredictable he would could not be dull and would appeal to the majority followers of today’s avant-garde some of which is totally random which explains it’s small following.
I find him totally predictable and this is why a lot of new comers to serious music start of by including him in their choice of composers, we must thank him for sonata form and of course the string quartet.
As you say there are a lot of works and composers out there that are not played/recorded much to day and IMO that is because they are not good enough to capture the imagination of the majority of music lovers, predictability is an asset in music not a fault.:cheers:
,

Huh! I'm seeing predictable, but I've always said reliable.
And that includes how feedback happens depending on the environment.
If you can't predict being reliable in your environment...

vandexa2 might be saying dull and unpredictable, because he's heard so much.
It might just sound too familiar, like everyone thinking they can sing like Elvis.
Oh, sorry, I should have said everyone thinks they can play like Jimi Hendrix.
These last few years, for the first time, Hendrix clones out-earned the Elvae.

So Hadyn, and I don't know his proper name,
was the first to popularize the sonata form and string quartets?
He's earned his place in the encyclopedia of music.
Too bad you guys aren't rock'n'rollers, like the Beatles or Rolling Stones,
or playing Hadyn backwards would give you something new to listen to.

I think if vandexa2 had said predictable and dull it would have made more sense however I would still disagree.

Okay, okay, "predictable and dull" has now sensated my brain,
uh, what's left of it, after all the auditory hallucinations my electronic effects create.
JHC, couldn't you just have gone along with me? Okay, you know the way.

I get too much predictable and dull in my life,
and that includes being able to sing along and catch words with songs I never heard before,
everyone being slacker to slack musicians, but having their own recordings.

I know you're too gracious a musician to bet that you can pre-guess the chorus,
but I might start doing that.

And admit it JHC, you did play Hadyn backwards, and the eerie voice scared you,
saying "Nydah, Nydah, won't you be mine-a tonight".
That's okay. You need to be on acid for that.

"Embrace of the Serpent", a foreign movie with a 2016 Academy Award nomination.
It's about a German scientist-botanist who traversed the Amazon in the 1900's.
Modern day black and white, but I watched it and marveled and was amazed.
A new movie, a three day loan, from the library. It's a treasure to hold, for a while.

And JHC, what you said about being predictable as being good, is good as good can get good.
I felt the goodness. I see the predictability. However, I don't need any more key changes.
That's like in a movie where it starts to get really good, and then the person wakes from a dream.
Fretting fingers like to move up and down the frets, no keys here.

Is it true that the as-yet-untitled Frederik Magle has a keyboard that changes keys for him,
and in reality, for the last few years, he's actually only played in A minor,
except for the two times he played in C#minor, standing up.
My eyes get a little sea-salted over here, over the oceanic waves, so I'm not sure.

DO YOU THINK i'M STUPID??? PROBablly loaDeD with a viruu s ThaT wood a fekT mI kaY bored

When you need a hire service in Ashburton or Christchurch, Johnstons Hire Centre have the superior range and a focus on excellent customer service. Visit our 'equipment' page for a listing of the stock we have for hire. This does differ according to demand in each region so please select 'Ashburton' or 'Christchurch' to get information for each branch.

American owned online in Ontario shows this as a potentially dangerous domain, saying their online credentials aren't proper, with other warnings, and asks to make sure you want to continue to the domain.
Johnstons Hire Centre is the domain.

Something else that's strange is going on, seeing a car waiting outside. Is that you, JHC, looking for me?

The owner said he's been driving it all summer, all over Ontario.
Just over 60,000 original miles.
Leather seats, bought from the son of the original owner near Boston.
He's planning on installing some air conditioning.
The radio was playing, I think, Haydn's piece inspired by the Brazilian rubber tree.

That was that, and this might be sTuPiD, but, looking at Haydn,
my mother's clan is Royal Buchanan through marriage to Hay.
My mother's mother, her mother, and keep going, all have Hay as a middle name.
Haydn could easily be a foreigner of offshore descent,
maybe a fourteenth step-cousin, sumpin'like that.

John Watt said:
Something else that's strange is going on, seeing a car waiting outside. Is that you, JHC, looking for me?
.
Click to expand...

I was there but in my company vehicle we go under the name of TIT Co. Delivering a load of Haydn CDs. 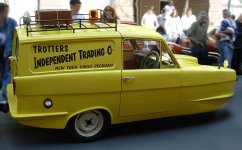 Seeing the TIT Co. truck brought big and another big, tears to my eyes.
It's been so long since I've been able to attract a delivery.

No wonder I didn't see you.
You wouldn't have lasted five minutes parked here on King Street.
The owner of the Kingsley, Welland's most loved bar, and a hang-out for pros,
a three minute walk down the street for me,
has had his new, Chrysler Marauder, key-scratched all over, twice in six months.
Even his Haydn discs are now unplayable.
You'll need heavy equipment.

You'll also have to take into account the effects of the Nuclear Organ for World Peace,
and the black hole tones penetrating the earth, that invites the horror we are now seeing.
Dolphins, now attacked by miniature drone marine mammal oil robbers,
are fleeing the oceans and even people along Lake Erie are now seeing them,
now just trying to get out of the water.
Little tow-motors force open jaws, so they can't close, while the rigs do their business.
Some people are saying they saw Haydn rising up out of the water,
while tone-zoned classical purists repeatedly say it's Haydk.
This is only very disturbing to strangers along the shore. 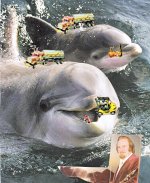 Where has vandexa2 gone? have we frightened her, please come back vandexa2 we are only fooling around, we desperately need your input please please please...........

I don't know if it was a messed up dichotomy or an unsettling duality,
that attracted me to vandexa2, and yes, we need to Haydn up.
Here's over five minutes of "The Spirit Song", with Dane or Swede names.
If I have to be sorry about this pick, the Windows 10 update killed my sound.
That's been happening to a lot of people who got the first version free.

Hey! Dig this! I was talking to someone new to Canada, a woman,
saying they were from Denmark, and, saying she met Frederik Magle.
I said I would like to shake her hand, so how's that for a new connection?
The conversation wasn't even getting to be a side conversation,
me more happy about hearing Denmark, until I pronounced his name in Danish.
Before I made a video for here, of me playing a public piano, introducing Frederik Magle,
I phoned the Danish Embassy in Toronto and talked with an Ambassador,
who taught me to say his name properly.

I typed Haydn and Frederik Magle together, hoping to see Hadyn as played by Frederik Magle.
It went to Frederik Magle's first page that has some Haydn videos, this being one.
The others were over an hour long, documentaries.
Last edited: 18 Oct 2016
You must log in or register to reply here.
Share:
Facebook Twitter Reddit Pinterest Tumblr WhatsApp Email Share Link
Top