I don't know what to say:grin::grin:

this could lead to all sorts of pics

Best to say nothing Colin

Is this girl power? 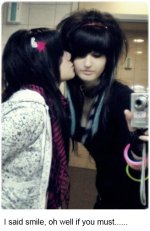 its never too late :grin:

[the message I have entered is now not too short]

A lot of girls seem to go for this now because it is fashionable. David Bowie sparked it with guys many years ago by announcing he was bi-sexual. I believe it often has more to do with fashion than sexuality. Its the same with tattoos over here. Girls going round plastered with them. Ellen made a big thing of her sexuality which rather put me off. Why don't people like her just get on with it and live their lives. I don't go around making a fuss about being hetero sexual. We are what we are and are accepted for what we are. I have a sixteen year old grand daughter who has proclaimed that she is a lesbian. She may be, but knowing her as well as I do, I do not believe she is certain exactly what she is at the moment. I do not feel any differently to her. One of my oldest friends reappeared in my life a few years ago, and has had a sex change (to female). After the initial shock it is still the same person there, only now a female version. A bit weird, but not nasty weird, just weird. We are still great friends and it has not affected our relationship excepting I now try not to say **** or ******* in front of her.

Staff member
:clap: Well stated there, teddy - or as some say there, "spot on!" :clap:

A former supervisor where I worked was lesbian ... we all knew it, but she didn't flaunt it in front of our faces ... that was her private affair, and it never impaired the workplace nor did any of us feel uncomfortable working in her area.

I have a cousin who made the sex change ... Christine became Chris ... still the same person inside, still a cousin. Chris eventually met another who had made the change from the other direction ... they eventually got married and adopted several children and live happy normal lives to this day. I don't think any less of Chris and none of the family makes a big deal of it ... yes, it was shocking at first, but the family accepted this and welcomed the new daughter-in-law to the clan with open arms.