In the spring of 1993 I went on my first concert tour to the Baltic countries, Latvia and Estonia. Among other places I played a concert in the magnificent Riga Cathedral (Latvia) on the 1883 Walcker organ which have 124 stops (144 ranks) and 6768 pipes.

I have now made a live recording of Johann Sebastian Bach's Toccata & Fugue in D minor (BWV 565) available on the net for free download in very high MP3 quality. 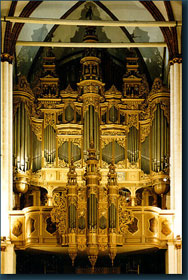 The pipe organ in Riga Cathedral

This rendering of Johann Sebastian Bach's Toccata and Fugue in D minor (BWV 565) is copyright Â© Frederik Magle and may not be altered or publicly redistributed in any way without express permission. You are allowed to link freely to this page. You are not allowed to link directly to the MP3 file (hotlinking) without clearly stating credits and linking to this site as well. The music has been uploaded for free download in accordance with Danish and international copyright law.
_____________
New Classical Music MP3 downloads by the composer and concert organist Frederik Magle | Dark Classical Music

Frederik. Denmark & Australia have Something in Common at The Moment,with Your Royal Family....However,I have Just Listened to this Recording.....We Have another Thing in Common......We BOTH agree on "The Tempo" of this Much Played Piece..What a Wonderful Instrument too.!!!!! Very Responsive,if Still a Tracker Action.???.... Well Done. Paul or Pamadu.

Thanks Pamadu. It is indeed still a tracker action-organ! It was completely restored to it's original state by the dutch organ builder "Flentrop" in 1983, which is rather extraordinary considering Latvia was a communist state at that time. But basically the Riga Cathedral Organ was considered the pipe organ in the Soviet Union. I have in my collection many Melodia records recorded on this spectacular instrument.

The reason I "bump" this old thread is that I just today discovered that there has been a lot of interesting reviews of this mp3 download at amazon.com. Nice

and it is indeed an interesting recording... - I've got another one downloaded somewhere I can't remember... from a recording in Assisi (the organ here seems a bit out of tune here and there - I don't know if that's just how it is... - my organ knowledge isn't that great

) - and it's interesting to see/hear the difference in interpretation between these two - the latter being a little more "romantic" than the first I would say...
Do you have any remarks on the comparison of those two recordings? - they are also 8 years apart - in 1993 you're only 16? - and the latter from 2001...

They are 2 completely different Organs.... I have listened to both now again, many times today... The 1993 Recording (Age 16) is in my opinion,the better one... ONLY in the context of a Young Man playing a Huge instrument and giving such a brilliant Performance of a "Much Played & Much Criticized Bach Piece"... Then on Top of it.!!!!!!!!!! You have to Give Credit to the 2001 Recording,because it shows the Brilliant work done on a "smaller Instrument".

to the BOTH...and that gets me out of Trouble....hehehehehe

Well, the two recordings are difficult to compare directly because it was two very different organs and very different concerts. Pamadu is pretty much right.

First, I had a decent amount of time for preparations of the concert in Riga, and during the concert I had two "registration-assistants". The organ in Riga Cathedral (which is one of the finest german romantic organs in the world) can not be compared to the organ in Assisi, which was unfortunately in a very bad shape (missing notes in some stops, slow pneumatic action - long delay from pressing a key to hearing the sound - etc.).

As for the concert in Assisi: When I sat down and played the Toccata, I did so without having touched the instrument before and making the stop changes while playing, guessing, using my experience and knowledge of organs in general. It was not a solo concert, but rather a concert featuring the Cecilia Choir (whom also had their own organist, Klaus Jerndorff, to accompany them). I just played for the fun!

Still, I felt that my rendering of the Toccata and Fugue that evening had a certain "touch" that represents a part of my vision of playing Bach (and other music), thus I decided to post it on the net even though it's very "raw". But it can not be said to be generally representive of my current way of intrepetation due to the circumstances.

What people (who are not organists themselfs) don't know is just how big a difference there is between the different organs around the world. I would say that - even if both were in equally good physical condition - the difference between an organ like Riga (tracker action, 124 stops) and the Assisi organ (pneumatic action, 15 stops) is just as big as between a piano and, say, a harpsichord (they both have keys and strings and that's about it), if not even bigger! The two simply cannot be compared and the playing style will have to be adapted to each instrument. That's part of what makes the organ so fascinating and challeging in my opinion.

I would have to do a new recording of a "big" concert with rehearsal and preparation time on a great cathedral organ, like the one Riga. Hmmm... Perhaps I should go back one day, maybe make a CD....

[UPDATE June 25, 2005: The Bach Toccata & Fugue mp3 file is no longer available for download at amazon.com since they closed/restructured their free music download section (so it now only consists of tracks from publically released CDs), but I have instead uploaded it to this server for direct download in a MUCH higher audio quality than before (256 kbps vs. 128 kbps mp3)]

Johann Sebastian Bach's Toccata & Fugue in D-minor - as performed by me in Riga Cathedral, Latvia in 1993 - can now be downloaded directly from this server as a high quality 256 kbps mp3 file Click here to download.

Sorry for the (mildly speaking) late reply, but better late than never I guess...

J.S. Bach himself generally left very few registration suggestions, and none for this piece. So any listed registrations in the Toccata & Fugue in D minor are later additions and can be disregarded if you feel you have come up with a better registration yourself. So yes, it's an acceptable opinion, indeed. Now, whether your choices of registrations actually are better than the listed is a different question that I of course cannot answer without actually listening to your playing and knowing the instrument.

I just want to update with a little piece of statistics-info: Over the last 5 months - since I moved the MP3 file to this server on June 25th - the Toccata & Fugue has been downloaded a total of 12,702 times and counting!

That makes it the top MP3 download (as far as I can tell) of the J.S. Bach, Toccata and Fugue in d-minor (BWV565) on the entire internet!!

wish I was there!

I admire anyone who can play any type of keyboard. But most especially a large Organ. I have no idea how in the heck you do it, I'm not anywhere near that coordinated.

Great recording! My first thought was: Helmut Walcha. (Don't know about you, but to me thats a big compliment!:grin: )
Good tempo. The fuga really swings. :guitar:

Staff member
ADMINISTRATOR
Regulator
Sorry for the late reply, but anyway: Thank you so much for those great comments Dave, Hildegard and Giovanni!! It means a lot to me to get such nice feedback on the performance.

Frederik Magle said:
...the Toccata & Fugue has been downloaded a total of 12,702 times and counting! ... That makes it the top MP3 download (as far as I can tell) of the J.S. Bach, Toccata and Fugue in d-minor (BWV565) on the entire internet!!

This isn't an MP3, and it's not exactly played on an organ, and views are not exactly the same as downloads:
http://www.youtube.com/watch?v=ipzR9bhei_o​
but it has been viewed 24,305 times ... of course, that doesn't mean it's a better rendition ... :nut:

Frederik Magle said:
In the spring of 1993, I went on my first concert tour to the baltic contries, Latvia and Estonia. Among other places I played a concert in the fameous Riga Cathedral (Latvia) on the magnificent 1883 Walcker organ with 124 stops (144 ranks) and 6768 pipes.

I have now made a live radio-recording of Johann Sebastian Bach's Toccata & Fugue in D minor (BWV 565) available on the net for free download in very high mp3 quality.

I had to join the whole friggin' board just to thank you for the download. That was wicked awesome!

I'm working on my yearly "Halloween" project and was just looking for that piece, so I stumbled on here by circumstance...but please forgive, the music isn't just part of a Halloween project to me either, I'm a painter and sculpter (and all kinds of other stuff as it were)...so it I'm not just some fly-by hick about it...I truely appreciate the music too.

We are all indeed in the presence of a true artist at the console. The articulation you were able to accomplish in such a live building is absolutely outstanding. Absolutely stunning performance - thank you for sharing.