Happy thanksgiving to all who celebrate !! Best wishes to those whose who do not 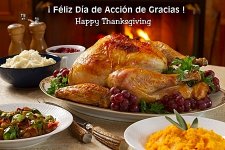 much to be thankful for in-spite-of political issues !!
N

The photograph is making my mouth water Bill ..... but we have to wait till Christmas to enjoy such a feast! :bawl:Happy Thanksgiving to you and to all who share it with you. Definitely not a day for politics! :grin:

Staff member
Thanksgiving was great for us too, Bill.

Hosted 11 people for dinner this year (part of a group that rotates homes every couple years).

No Thanksgiving Day church service to play either ...

Krummhorn! I'm just adding to this thread so I don't have to see Thanksgiving any more.
It was frustrating being homeless, when before, I was cooking turkeys at $1 a pound,
and seeing them get down to 87 cents, and that's not utility birds.
And, on the homeless diet, I gained 15 pounds.

Free electricity, free highest speed online, free telephones,
doing it all, except no stove, just a choice of hot-plates from the above showrooms.

After having all my stuff in two different storages for over six months,
it's like getting a lot of stuff for free, and it's stuff I really, really like.

As far as turkeys go, the turkeys that were brought up and released in Short Hills Park,
almost fifteen years ago,
have migrated along the canal to Lake Erie, people even seeing them in Fort Erie.
I spent a few hours a few times sitting in Short Hills blinds, never seeing one.
Now I see them every time I'm out on a bike-hike, really big birds.

I'm seeing a new kind of turkey,
the new domain build device that replaces the existing one.
Now, it looks like it's more about building for devices, not computer domains.
Starting with Bell, transferring to COGECO, and being Easy Hosting.com for over five years,
I've only used Easy Wizard Pro.
Searching only for the first time, looking around for that,
every offering or reference has no manufacturer information.