Staff member
ADMINISTRATOR
Regulator
Update, July 2009: mp3 excerpts from the »Cortège & Danse Macabre« and »Carillon« are now available as free downloads here (page also contains more in-depth info about the music as well as the full text from the poems).


For almost six years I have been working on completing my symphonic suite »Cantabile«, of which the first movement, »Souffle le vent«, was given its premiere performance in 2004. It's been a long and difficult process for me, but finally I can now announce the first performance of the remaining movements of this large work.

On June 10th, 2009 (at 19:30 / 7:30 pm) the first performance of the second and third movements of the "Cantabile" - a symphonic suite in three movements, each based on a poem by H.R.H. Prince Henrik, the Prince Consort of Denmark - will take place at a concert in the newly build Copenhagen Concert Hall (DR Koncerthuset).

The concert is a gala concert and the official celebration of the Prince Consort's 75th birthday. The 500 invited guests will include the official Denmark (such as the government, etc.). However, there will also be public access, and tickets can be bought here:

The work will be performed by The Danish National Symphony Orchestra and Chorus conducted by Thomas Dausgaard. And the soloists are Ina Kringlbotn, soprano, and Erland Tyrmi, baritone. The third movement »Finale« also contains a semi-soloistic piano part, which I will play myself 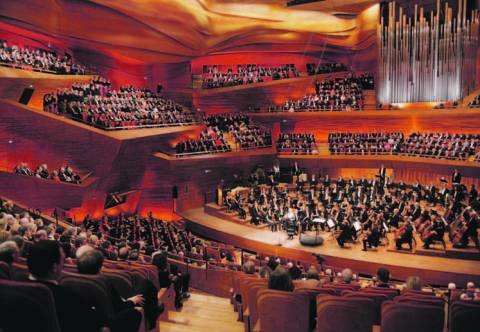 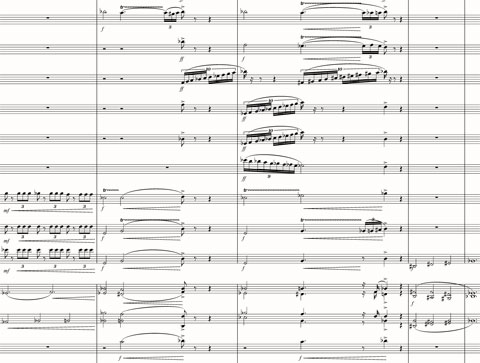 a detail of the second movement


The concert will be recorded for radio and television and broadcast on DR television on the following Sunday (the 14th).

I will update with more information along the way, but I can tell you that I personally consider this music some of my best work - if not the best - I have ever done and I'm very excited to present it to the public.

It's wonderful you've finally completed your symphonic poem. This concert is going to be huge, cultural event, as I can see. With the Danish National Orchestra and the new concert hall. I'm afraid I won't be able to come to Denmark but I wish you all of the best and hope that your future career will be developing as well as it has been so far.

This is indeed a very important concert for me, and finishing Cantabile is a major milestone. In some ways this work has blocked me for last 4-5 years, but I do think it has been worth the effort in the end as I'm really happy about the result

Hopefully I will be able to upload a recording/video after the concert, though I will need confirmation about that.

All the best,
Frederik

Sure wish I could be there to hear this live; it's going to be very exciting! If the new hall sounds as amazing as it looks, attendees are surely in for a very special and wonderful evening. :up:

That concert sounds amazing, and the hall looks really good. I can't be there but wish I could, so I can only wish you all the best. I am sure it will be a triumph, so enjoy yourself and be proud of your achievements.

How does the van den Heuvel organ sound in the Concert Hall? There have been reports that the architect of the Hall is not a fan of organ music and that he *boxed-up* the instrument, so much so that it has a deleterious effect on the sound produced by the instrument. Congratulations again on this your achievement soon to be heard and experienced.

Staff member
ADMINISTRATOR
Regulator
Thanks all

Robin and Margaret, I sure wish you could be there too, in this beautiful and spectacular concert hall, but I hope to be able to upload at least parts of the recording here after the concert, though I need to get permission from the Danish Radio to do that of course.

Corno Dolce, :tiphat: I haven't heard the organ myself yet "live", but from what I am told (and which seems plausible), the problem may stem from the "facade" which does not comprise of speaking pipes, but rather a more or less massive wall of decorative aluminium tubes. That surely holds back some of the sound.

Luckily I decided to write the piece so it can be performed without an organ. It can, and will still sound good even though the organ ended up playing a slightly more important part than I originally planned - I just couldn't help it

Anyhow, I'm sure this organ will still be able to provide a fine addition in the performance of my work. Several places I use only the 32' and/or 16' registers in the pedal and I would expect the lower pitches to be able to penetrate the aluminum facade (or whatever it is that seems to muffle the sound) better than higher pitched voices/pipes. Other places I use the full organ to various degrees, and I'm sure it can at least add to the orchestral tone in the way I want these specific places.

rojo said:
Sure wish I could be there to hear this live; it's going to be very exciting! If the new hall sounds as amazing as it looks, attendees are surely in for a very special and wonderful evening. :up:
Click to expand...

marval said:
That concert sounds amazing, and the hall looks really good. I can't be there but wish I could, so I can only wish you all the best. I am sure it will be a triumph, so enjoy yourself and be proud of your achievements.

Goes for me, too, can't swing getting there this year. I know that it's going to be an evening Denmark won't forget for many years to come. We're so very proud of you and your accomplishments, Frederik.

Staff member
ADMINISTRATOR
Regulator
I've just posted part 1 of a more extensive description of the process of composing Cantabile, and the planning of the concerts, on my now "revived" blog: A Long Journey - The history of Cantabile (Part 1). If you have any questions or would like me to explain anything more in depth please don't hesitate to ask.

Magle:
What channel will it be on in Denmark as I can access many TV channels worldwide from my computer...maybe I can catch it... Thank, Bill

Staff member
ADMINISTRATOR
Regulator
Bill, I don't know yet the time or exact channel, but it will be either "DR1" or "DR2". As soon as I have some more info I will post it here

Btw, i've been at the Zoological Museum in Copenhagen all morning, where I have been playing on bones in order to find the perfect one for use in the 2nd symphonic Poem of »Cantabile« - the Danse Macabre!. I found one. A Giraffe thigh bone (from 1930) which I quite extraordinarily have been allowed to borrow with permission from the museum.

Wish I could be see this gala event and hear this great composition.

Staff member
ADMINISTRATOR
Regulator
Thanks, Lars. The concert went very well and the reception by the audience was nothing short of fantastic!!

It will also be available on the net, as streamed video, and I will provide a link when available.

In just 1 1/2 hour from now (8 pm, Danish time) the Danish radio is sending the whole concert, it is being streamed "live" here.

Will the televised version on Sunday be available on the net?

Superb performance ... and the acoustics of that hall are excellent.
And the very enthusiastic and thunderous applause at the conclusion of your piece was quite appropriate and very moving.

Congratulations on a great performance, composed by a very talented musician as yourself. Absolutely fantastic.

What was the orchestral piece played right after your work? And the short piano work?

Staff member
ADMINISTRATOR
To add to the above:
There will be a televised presentation of this concert on Sunday, June 14th on Danish station DR1. It will be available as a 'streaming' program on the internet.

This is a "must see" for all MIMF'ers, and the rest of the world. Frederik has poured many years of this life into this fine work, and the end result is absolutely fantastic. If you have ever listened to the other works of Frederik ... this one is equally as exceptional.

I had the great opportunity of hearing the internet radio broadcast yesterday (Thursday, June 11) on Danish radio, and was on the edge of my chair all during Frederik's work. The orchestra, the choir, the organ, and of course Frederik on the piano were seamless in their presentation. Despite limited rehearsal time for the entire group as a whole, this musical presentation came off like they had rehearsed it for many months together. It was pure perfection to the listeners ears.

At the conclusion of the piece, a wonderful surprise in itself (you'll have to hear it for yourselves), the audience must have immediately leaped up from their chairs in a thunderous appluase in appreciation of "one of their own" and his musical talents.

Like I said earlier, every member here needs to make every attempt at seeing the televised program. Frederik's work was the highlight of the evening for everyone attending, and for me as well some 8,000 miles away listening to the program via the internet.

I can't say enough about Frederik's musical compositions, not because I am a staff member here, but because I think he is a very gifted musician and composer.

Remember, Sunday, June 14th - DR1. I found the url once, and if we come across it again, Frederik or I will post it here.

Staff member
ADMINISTRATOR
Regulator
Thank you, Lars!! I am truly happy and honored you feel this way about my new work, and my works in general.

My music almost like a child to me, and reading your post makes me a proud father

As soon as I know more about when and where the streaming video of the concert will be available, I will post it right here in this thread.

All the best,
Frederik

So glad I still have a chance to hear this.