What jazz have you been listening to today?

This is a major find, knowing some of these musicians in 1970,
when I first moved to Toronto.
Doug Riley had a house band gig in a big room with a heavy cover charge.
He became a big pop hit player with Dr. Music, Doug Riley Music,
and was the keyboard player for Lighthouse, a huge band.

In 1980, my Nova Scotia keyboard friend's brother bought Moe Koffman's flute.
He had to see Moe Koffman answering the door to believe the ad was real.
Moe said this flute, the one he recorded Swinging Shephard Blues with,
is his old one, now having a new one, and he wanted it to be played.
My friend spent the afternoon, trading it back and forth.

Doug Riley only plays a piano or electric piano, hard to tell,
and a Hammond B3 organ.
The Piltch Brothers are guitarists and bassists,
and I really liked them when I saw them back then.
That's also a Stratocaster that's being played with an upright.
This is beautiful music, for me, doing it all.
25 cents at a church fund-raiser.. 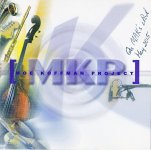 I have been listening to the latest hit by the 72 yr old legendary icon; you may pls listen and comment:

Did not understand the words but loved the rhythms and the video.

I'm catching a little international thrill right now.
JHC is one day ahead of me, and yes, I should have known already.

So if I put up what I'm listening to, I'm a day late.
And that's all I'm going to say about that.
I could be a hater, but I'm not. I'm not feeling that way at all.
If I did, I wouldn't be typing about it, no way. For sure.
I don't even feel flat about it, and obviously, I'm not very sharp.
Okay, I'll look at tomorrow's video and come back to edit. Maybe.
I'm not used to looking into the future, at least not with the audio.

Hey! This wasn't just ordinary YouTube, but a professional film soundtrack.
Music from India sounds ordinary for most North Americans, but it's not.
They have a minimum 18 notes per octave, as an ordinary cultural reality,
and sometimes that can be over 30 notes. Even sitars have moveable frets.
I can do a nice sitar imitation on guitar, but I have a hard time trying, that's trying,
to sing it.

I consider movies from India to be more vibrant, lively, and humanistic,
than most North American products, especially Hollywood and New York.
And I love the dancing, doing imitations of that.
But I have a serious choreography comment.

When the young man turns as he's leaving the beautiful young woman,
he grabs his shirt collar with both hands, by the points, and lifts it up,
and than lets it down. What's with that?
He should be lifting his collar up, holding the sides, and moving both hands back and forth,
giving himself a rubbing across the back of his neck, getting some motion for the emotion.
That could also be in time with the soundtrack.

I watched this all the way through, something I usually don't do.
Is it tomorrow yet?
Last edited: 28 Nov 2016

John Watt said:
Music from India sounds ordinary for most North Americans, but it's not.
They have a minimum 18 notes per octave, as an ordinary cultural reality,
and sometimes that can be over 30 notes. Even sitars have moveable frets.
I can do a nice sitar imitation on guitar, but I have a hard time trying, that's trying,
to sing it.
Click to expand...

That is very interesting John I read years ago that Indian music uses 1/4 notes or as you Americans would say 1/4 tones that is what makes it sound so unique, similar to but not the same as "Just temperament" in western early music as opposed to equal temperament, what I find interesting is the rhythms that are used.

You're right about the rhythms, something I liked about Indian music right away.
Indian musicians have many styles, with one that can only be called raggae, by us North Americans.
When I was hiking or camping with my high school friends, uh, oddly enough, all musicians,
I was more than happy to use my canteen as a tabla, jamming along.

It's too easy to look at the octave and start dividing it up mathematically,
as you say, 1/4 notes, but the sitar has such high frets you can press the string deeper,
and be more expressive without moving to another fret.
Ritchie Blackmore was the first person I read about who did that with a Stratocaster,
getting the neck carved out between frets so he could push the strings down,
as much as side to side.
I often think what it must have been like for Japanese musicians, having a five note octave,
when they first heard European 12 notes to the octave music.

I am Canadian. I have to say what every explorer and white contact has ever said,
about the Haida of Northern British Columbia. They are the best singers in the world,
having the highest highs and the lowest lows, with intensities and peacefullness never heard before.
And as soon as they get onshore, they put on costumes and carved, movable headpieces,
to start singing and acting out all the action.
Before the first white explorer reached their coast, a summer, ocean-side community hall,
could accommodate over 600 people.

I do have some jazz happening right now, but it's not good.
The library had the new movie about Miles Davis, now my second viewing,
and how they can make a movie about a jazz trumpeter without featuring any stage performances,
except for some sloppy jamming during the credits, is just the start of my criticisms.
Don Cheadle makes a passable Miles, but that's just for looks.
When I used to see Miles Davis as a guest on talk shows,
that's because the main guest would request that Miles be asked to be sitting there,
or they wouldn't be on the show.

Bennie Moten, King Oliver and Duke Ellington. That's five for the price of three........ Your get Louis and Bassie in that bunch too ;3

I hafta say me, playing and singing "Misty", by Erroll Garner, on my little acoustic guitar.
I'm getting better.
And I am wandering through this wonderland alone,
even if I'm left-handed, and unlike righties, don't wonder about my left or my right,
and I haven't had my first middle-aged moment yet, so I don't forget my hat or my glove.
I'm going to have to sing my own words, again.....

I came across these guys last week - the Nick Maclean Quartet, they've got a new album out that reminds me A LOT of Herbie Hancock!


This is a video of them playing 'One Finger Snap' - it's BURNING and that Brownman Ali on trumpet is just channeling Freddie Hubbard!

The first thing I thought was keithmcjazz, maybe he's Scottish,
when I'm a son of Sons and Daughters of the Gael who speak Gaelic.
Yeah! Bay-an-uck let, blessings on you.
And then I saw Nick Maclean Quartet, thinking they're from Scotland also.
But then I saw "Brownman Ali", and he reminded me of Nick Ali, a trumpeter in Toronto.
I could have jammed with him in the executive lounge after one day of the DuMaurier Jazz Festival in Toronto,
and he gave me his card back then, having a jazzy band happening himself, coming in to Toronto.

I don't think I would describe any music scene in Toronto as bustling.
Hustling and rustling, for sure, being territorial and invasive, almost inbred, always,
and sooner or later, getting so laid back they just form a heap.
A sticky, jammy heap, but spending too much time being self-promotional can do that.

I'm going to click this reply and see if I can dig his card out. That was early nineties, I think.
My scanner is feeling lonely.

Oh! I had that DVD live concert tribute on, half for John Coltrane, half for Bill Evans.
Last edited: 7 Jan 2018

Hey! I feel like a pro. I must be if I'm this organized again, finding it right away.
He was put in "musicians", a good choice.
I recognized Juni Booth in a club in St. Catharines at this time of this card,
maybe late eighties, early nineties, after seeing him with McCoy Tyner in Toronto,
during the Atlantis tour, maybe 1976.
Juni phoned me from Buffalo, saying I could go with him as a co-sign-in,
to the DuMaurier Jazz festival, if I could pick him up at his mother's and drive.
Oh... oh... a wonderful day, backstage with the headliners, other musicians Juni recorded with,
in the executive lounge until four in the morning, being asked to jam twice,
but I never brought my guitar, and the ones offered to me were right-handed.

I'm having to restrain myself, as I would love to describe more of that day, and night.
The vocal expression of my mood now would be "Alabama" or "After The Rain" influenced,
maybe with some Hendrix chords and sounds for "Somewhere Over the Rainbow",
leading into "Misty", yeah... it felt like an angel carrying me along that day.
For sure I would have called, but it was just too long distance.
And once I started hitting it in Niagara Falls, almost always house bands,
it's even too far and too much of a highway drive to get up to Toronto. 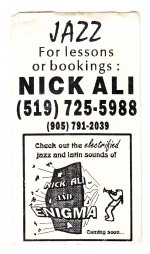 Wow! I really am actually disappointed not to get any kind of reply here.
Not enough to write a sad song about it, but still...

I got to pick through a couple hundred CD's offered to me for free today,
and right now I've got "Medeski, Martin and Wood" playing,
"Friday Afternoon in the Universe".

At times like this, as a senior musician, I'm too happy to having been a dance band, showband player,
and someone who saw Jimi Hendrix, George Benson, Deep Purple, Herbie Mann, and other bands,
as my influences in 1969-70, when I bought a '64 Stratocaster and ordered a Marshall from England,
with effects.
I really don't care about the CD artwork or use of font, or the crystal plastic case.
Nothing is ever going to put my head through like Jimi did when I was a teenager,
and liking John Coltrane to Nicolo Paganini, wanting to be a virtuoso player like they were,
still moves me in ways that only improves my finger-work and outlook on life.
If I can jam along, yeah... that's all I want to do.

One of my favorite albums to jam along with, as a teen, was Elvin Jones' "Agape Love".
I'm still looking for that on CD.

I'm seeing my name on the forum here for far too long,
but that's not why I'm updating it.
Here's what I've been listening to today, very very nice.
Over ten minutes long.